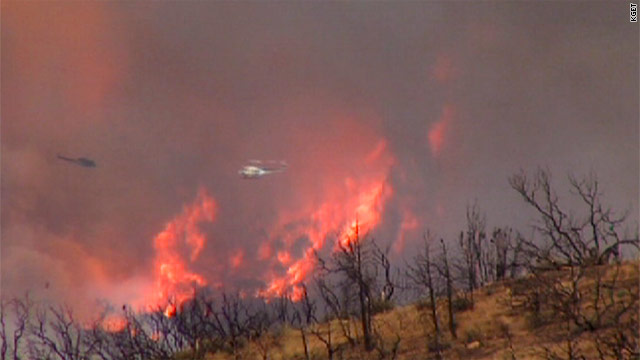 (CNN) -- A fire caused by a plane crash threatened 800 homes or structures in Tehachapi, California, on Monday, with nearly 5,000 acres ablaze in rugged terrain, according to state and local officials.

The fire started Sunday and was 5% contained by Monday, but there was no estimate of when it would be fully contained, according to a statement from the California Department of Forestry and Fire Protection and the Kern County Fire Department. Evacuations were recommended in the area threatened by the fire and at least three roads were closed, the statement said.

A relief center has been set up at Jacobsen Junior High School in Tehachapi for evacuees.

"Firefighters are working in extreme conditions, high heat, low humidity, with the potential for erratic winds," according to the statement. The fire was burning in a mix of grass, brush and trees in steep rugged terrain, officials said. It was moving southeast toward Old West Ranch, Tehachapi City and Oak Creek and local power lines were threatened, according to the statement. Bulldozers were building perimeter lines to try to halt the fire, the statement said.

The plane crashed and burned near Mountain Valley Airport in Tehachapi, about 100 miles north of Los Angeles, FAA spokesman Ian Gregor told CNN. He said local authorities had confirmed one death, but did not know whether any other people were aboard. The FAA and the National Transportation Safety Board will look into the cause of the crash, Gregor said.

Six hundred firefighters were on the scene trying to corral the 4,759-acre fire. The effort also involves 69 engines, 21 fire crews and two helicopters, according to the fire agencies' statement. One injury has been reported and one structure has burned, the statement said.