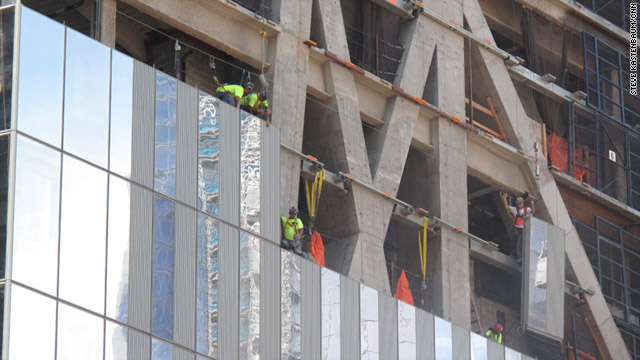 New York (CNN) -- A few men are down on their hands and knees at the 9/11 memorial plaza in Lower Manhattan, laying sod around some of the trees. Fortunately, Hurricane Irene didn't damage any of the trees on the site. The reflecting pools made it through the storm unscathed, too. They're going through some final tests before the memorial opens Sunday, the 10th anniversary of the terrorist attacks.

As relatives of the victims prepare to memorialize their loved ones at the site of the attacks for the first time in several years, construction workers prepare for a day off from a project that's been moving forward 24/7.

"Looking down on those two fountains, it gives you the chills," said Adam Romano, a concrete worker at the site. "You look at those footprints ... you see those buildings as if they are still there."

The making of a memorial: Reshaping ground zero

Construction workers like Romano feel an immense amount of pride now that the anniversary is just a few days away.

It's not just guys, though. Among the thousands of iron workers, carpenters, electricians, plumbers and concrete workers are a few dozen women. Kelly Potts is an electrician working on 1 World Trade Center, the skyscraper taking the place of the twin towers.

"My heart goes out to all those families who will re-experience the grieving period again," Potts said. "Maybe they'll be able to have some closure from what we are doing."

"I remember when it happened, when it when down, where I was at," said Celeste Ferreira, another electrician working at the site. "To see it being rebuilt and seeing the progress ... and to be a part of it, it means a whole lot to me."

Virginia Bauer will be among the 9/11 family members gathering at the plaza for the memorial service. She lost her husband, a bond trader at Cantor Fitzgerald, in the attacks. She's been to the site many times since then.

"I saw people there working tirelessly, day in day out, 24 hours a day. That will not go unnoticed," Bauer said. "They needed to be thanked, and I wanted a chance to do that."

The general public will have their chance to say thank you starting September 12, when the 9/11 memorial opens. The construction workers will also return to the site on that day. While the plaza will be completed, the rest of the project won't be done for at least three more years.