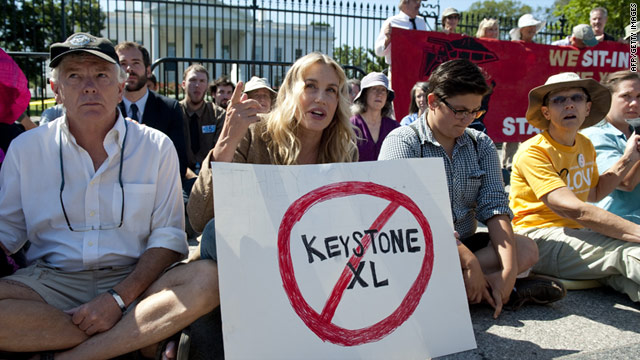 Actress Daryl Hannah, center, sits in front of the White House on August 30 during a protest against the Keystone XL pipeline.
STORY HIGHLIGHTS
RELATED TOPICS

(CNN) -- The battle over the proposed Keystone XL pipeline, which would stretch 1,700 miles through six states, from Alberta, Canada, across the U.S. heartland, and into Texas to Gulf Coast refineries, is intensifying.

The final congressional hearing on the $7 billion project is scheduled for October 7 in Washington. And the State Department, which has to sign off on the deal because of the international scope of the project, has said a decision is expected before the end of the year.

Environmental groups are furious about the pipeline, which would carry at least 700,000 barrels of tar sands oil a day to U.S. refineries, and the plan to run it through sensitive environmental areas. During a two-week protest in front of the White House more than 1,200 people were arrested, including actress Daryl Hannah and leading NASA climate scientist James Hansen.

Veteran activist Bill McKibben, with the group Tar Sands Action, was the main organizer of the civil disobedience campaign or sit-in, which ended this weekend. The group wanted to send a message to President Barack Obama because the project also needs a presidential permit to move ahead.

"There are two basic problems here. One they want to run a 1,700-mile pipe and they're going to run it through some of the most sensitive land in this country: The Ogallala Aquifer (which provides drinking water for 20 million people) in the middle of the country," McKibben said.

McKibben thinks the second problem may be the bigger issue. "Even if you can get all that oil to Texas without spilling it, what you've done is open up a huge pipeline into the second-largest pool of carbon on Earth, after the Saudi oil fields." He quotes leading scientists as saying if oil companies tap this huge pool of tar sands in a big way, "it is essentially game over for the climate."

The oil industry disputes this.

And the State Department concluded in a final environmental review on August 26 that the pipeline would have no significant impact.

"There would be no significant impacts to most resources along the proposed pipeline corridor," Bureau of Oceans and International Environmental and Scientific Affairs Assistant Secretary Kerri-Ann Jones told reporters on August 27.

A spokeswoman for the American Petroleum Institute, Sabrina Fang, says TransCanada is going to develop the pipeline, whether the U.S. is involved or not and that China is poised to get involved in exporting the oil if the U.S. doesn't.

Fang says she thinks the protesters are really protesting against jobs. She points to the flat Labor Department jobs report for August and the nation's 9.1% unemployment rate last month. "This pipeline can create 20,000 jobs, almost immediately. So we are very much for this pipeline. We think it's great for the American economy 'cause it will create jobs and it's also good for energy security."

Later this month McKibben says more civil disobedience actions are planned in Canada on Parliament Hill in Ottawa. He also says they're planning another big protest in Washington on October 7, the day of the final hearing.

The pipeline would draw from oil sands deposits in Canada and pass through Montana, South Dakota, Nebraska, Oklahoma and Texas, with construction on an existing pipeline in Kansas. It is estimated to cost $7 billion.