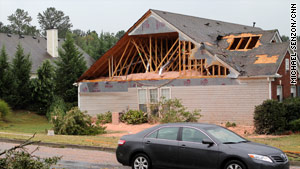 Have you been affected by the storm? Share photos and videos, but only if you can do so safely.

Atlanta (CNN) -- Tornado warning sirens echoed across northern Georgia on Monday as the remnants of Tropical Storm Lee swept through the area, damaging dozens of homes and knocking out power to thousands.

One man was treated for "superficial" injuries after being rescued from the basement of a collapsed home near Woodstock, about 30 miles north of downtown Atlanta, Cherokee County Emergency Management Supervisor Robby Westbrook told CNN. He said sheriff's deputies counted more than 100 homes damaged in a roughly five-mile stretch around the town.

The storm also knocked out power to about 20,000 Georgia Power customers, half of them around Atlanta, company spokeswoman Christy Ihrig told CNN. Another 5,000 were left in the dark in Savannah, on the Atlantic coast, with the remainder of outages scattered around the state, Ihrig said.

Lee hit southwestern Louisiana on Sunday and has drenched the Southeast as it moves inland. One flooding death was reported in rural northeast Mississippi, while authorities were still searching for a teenager they said was swept off a beach on the Alabama coast.

'There's nothing left of these houses'

In eastern Tennessee, Chattanooga saw a record 8-plus inches of rain in a 24-hour period and was expecting another two inches, said David Gaffin, a National Weather Service meteorologist. The previous record of 7.61 inches had stood since 1886, he said.

Two nearby creeks were both over flood stage, but both were expected to crest Tuesday. South Chicamauga Creek, near the Chattanooga airport, ran seven feet over its 18-foot flood stage Monday evening, while Lookout Creek, at 17 feet, was five feet over, Gaffin said.

Lee weakened to a tropical depression after hitting land, but was projected to dump up to 20 inches of rain on some areas as it moves northeast, the National Hurricane Center said.

The sole confirmed fatality as of Monday evening was in Tishomingo County, Mississippi, where one person drowned after floodwaters swept away a vehicle, state emergency officials said. But the threat of flash floods forced authorities in Jackson to evacuate more than two dozen families from an apartment complex early Monday, Jackson police spokeswoman Colendula Green said.

And in Alabama, searchers were still looking for a 16-year-old boy who was last seen on a beach near Gulf Shores on Sunday, Baldwin County Sheriff's spokesman Anthony Lowery told CNN. The search would continue as weather permits, he said.

Lee's winds have also fueled wildfires that killed at least two people and threatened about 1,000 homes in Texas, officials said. At least 450 homes burned down and thousands of people were evacuated in Bastrop County, authorities there said Sunday night.

In eastern Texas, a mother and her 18-month-old child died when flames engulfed their mobile home near Gladewater, the Gregg County Sheriff's Department said.

State and local officials in Louisiana had reported flooding over the weekend in numerous parishes, including Iberia, Terrebonne, Plaquemines, St. Bernard, St. Tammany and Jefferson. Crews in Crown Point, Louisiana, were scrambling Monday to create makeshift levees aimed at protecting homes from water that was creeping out of the Intracoastal Waterway.

New Orleans Mayor Mitch Landrieu told reporters Sunday that the storm had dumped 10 to 13 inches of rain on the city and brought wind gusts of up to 50 mph. But New Orleans is otherwise fully functional, with all 24 pump stations in the city "100% operational" and roughly 200 people without power, down significantly from Saturday, the mayor said.

Lee is expected to dump considerable rain in the East -- including New Jersey, New York and Vermont, where grounds are drenched and rivers are already full after Irene. The hurricane center noted Sunday night that "flooding rains (are) expected to spread from the Gulf Coast to the Appalachians."