Georgia police: Woman dies after exposure to odor at McDonald's 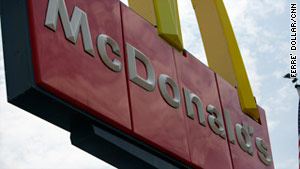 One woman died and at least eight people went to a hospital after being exposed to an unidentified odor at a McDonald's.
STORY HIGHLIGHTS

(CNN) -- One woman died and at least eight other people were hospitalized after being exposed to an odor at a McDonald's restaurant in eastern Georgia, a police chief said Thursday.

Police and fire personnel were called to one of the chain's restaurants in Pooler, just west of Savannah, about 11:50 a.m. Wednesday, Pooler Police Chief Mark Revenew said.

Upon arrival, first responders found two people unconscious in the women's restroom and also "became stricken (by) an odor," according to Revenew.

Pooler Fire Chief Wade Simmons said crews "immediately backed out and put on their breathing apparatus," at which point they re-entered the bathroom.

The stench notwithstanding, Revenew said, authorities were able to bring the women outside and begin providing medical attention, including CPR.

Nine people, including three firefighters, were transported to a local hospital. The nine included Anne Felton, 80, of Ponte Vedra, Florida, who died.

The police chief said that although an investigation is under way, authorities do not anticipate filing criminal charges.

"It appears to be an accident," Revenew said.

The chief did not offer any other details, including the cause or nature of the toxic fumes. And in a statement released through McDonald's corporate offices, franchise owners John and Monique Palmaccio said "authorities have been unable to determine the cause of the incident."

The owners noted that the restaurant reopened Wednesday afternoon after authorities, following a "thorough investigation," "deemed (the location) to be safe."

"(We) are deeply saddened by this tragic incident," the Palmaccios said, adding that they are continuing to work with authorities. "The safety of our customers and employees has and will continue to be our number one concern."

CNN's Melanie Whitley and Greg Botelho contributed to this report.