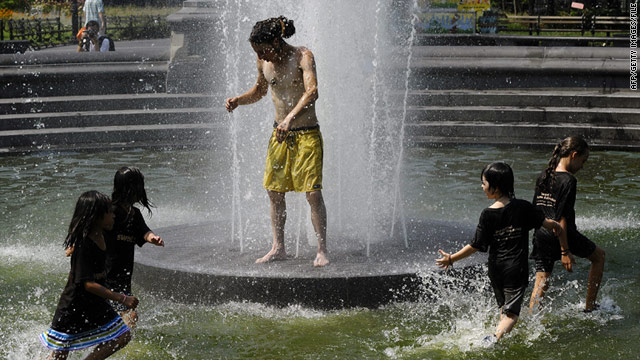 (CNN) -- The summer of 2011 was the second hottest on record for the United States, and the hottest in 75 years, government weather experts said Thursday.

Louisiana, New Mexico, Oklahoma, and Texas experienced their warmest summers ever, with several states seeing an average of more than 86 degrees, scientists with the National Oceanic and Atmospheric Administration said.

For meteorological purposes, summer consists of the months of June, July and August.

At least 22 people died as a result of the heat wave that swept the nation earlier this summer, according to the National Weather Service.

Texas had the distinction of experiencing the warmest summer on record of any state in America, with an average of 86.8 degrees. Dallas residents sweltered for 40 consecutive days of grueling 100-plus degree temperatures. Oklahoma, at 86.5, also topped the previous record, of 85.2 degrees, set in Oklahoma in 1934, amid what became known as the Dust Bowl.

For the month of August, Arizona, Colorado, Louisiana, New Mexico, Oklahoma, and Texas had their warmest in recorded history, while regionally, the Southwest and South also had their warmest August ever. Only nine of the lower 48 states saw August temperatures near their average readings, while none experienced below-average temperatures.

The persistently warm temperatures for the months of June through August, combined with below-average precipitation, also contributed to a record-breaking drought across the southern part of the United States. Texas was subjected to its driest summer ever, with a statewide average of only 2.44 inches of rain -- 5.29 inches below the long-term average, and more than an inch less than the previous driest summer in 1956.

Meteorologists are predicting no immediate end in sight to the heat or drought afflicting the Southern states. NOAA announced Thursday that la nina, a naturally occurring climate phenomenon located over the tropical Pacific Ocean, is expected to strengthen and affect global weather patterns. Scientists attribute the extreme weather around the globe during the first half of 2011 to the weather event, and predict that the drought currently overtaking the states of Texas, New Mexico and Oklahoma is likely to persist.

The extremely dry plains are a tinderbox for Texas; nearly 180 wildfires have been reported across the state in the past seven days, the Texas Forest Service Texas said. A large wildfire blazing outside Austin has destroyed nearly 1,400 homes and is not near containment.