Office plant found at ground zero a symbol of rebirth 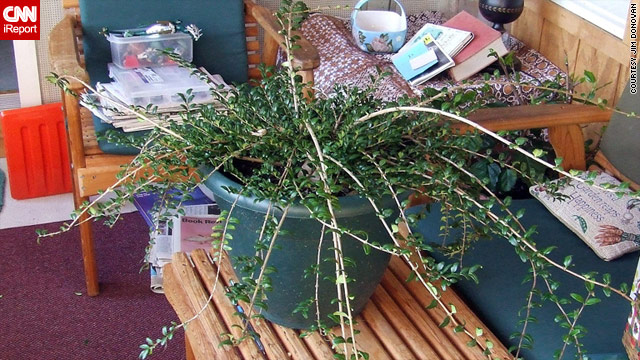 "It reminds me of how people can carry on," Gee Rittenhouse said of the plant found at the 9/11 site. "They grow and blossom."
STORY HIGHLIGHTS

(CNN) -- On September 12, 2001, Gee Rittenhouse, an expert in wireless technology, went to ground zero in search of signs of life.

He found it, but in a form he never could have predicted.

Rittenhouse and other experts were brought in with special equipment after reports that people trapped in the World Trade Center debris were making phone calls, asking for assistance. Those reports later proved false.

On the first night of work, Rittenhouse realized "how compacted the towers were. Immediately, you realized there would not be many (survivable) spaces there."

Toiling in dense dust, Rittenhouse saw a sphere-shaped object, about the size of a softball, that stood out in the shattered remains of the 110-floor towers.

Thinking the ball might be a toy, he picked it up, only to learn the tiny, dense discovery was an office plant root ball that somehow survived the catastrophe. It had no stem or leaves.

Rittenhouse took the roots home and planted them.

"It's a very special plant for us," said Rittenhouse, 51, head of research for Bell Labs at Alcatel-Lucent.

So special that when his family was transferred to France in 2008, Rittenhouse thought of Jim Donovan, whose son is close friends with his own son. The families live in Holmdel, New Jersey.

Donovan moved the hardy plant to his home, where it receives filtered light and is brought inside during the winter.

"With his care and feeding, it's bloomed," Rittenhouse said.

See more photos of the plant

"Though the species has yet to be determined, it is a very hardy perennial, with dark green glossy leaves," wrote Donovan in a CNN iReport on the plant. "The flowers seem like little honeysuckle flowers, with the scent of lemony jasmine."

"The fact that it lived after that (the terror attacks), I think it has power as a symbol," Donovan, 52, told CNN Saturday. "Life came out of the ruins."

Sunday, September, 11, Donovan, an actor, will attend a memorial service in Holmdel or Middletown. Rittenhouse will say a silent prayer.

Rittenhouse recalled Saturday how the technology team spent about a week at ground zero. They were unable to pick up any signals from victims.

"Those guys were so incredibly brave and anxious to find any technology to find survivors," Rittenhouse said.

Rittenhouse, who recently returned from France, said improvements in technology and procedures since 2001 have allowed rescuers to better pinpoint cell phone signals from people in natural disasters, such as 2005's Hurricane Katrina.

Rittenhouse has a clipping of the rescued plant growing in his garden. Donovan said he might return the original plant to his friend on Sunday as a remembrance of 9/11.

"It reminds me of how people can carry on," Rittenhouse said of the plant. "They grow and blossom."