Pakistan must do more in al Qaeda fight, Biden says 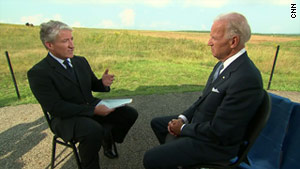 (CNN) -- Pakistan has been an unreliable ally of the United States in the war against al Qaeda and other extremist organizations, U.S. Vice President Joe Biden told CNN in an interview set to air in full Monday night.

Biden, who spoke to CNN's John King on the eve of the 10th anniversary of the 9/11 terror attacks, said Pakistan has failed "on occasion" when forced to choose between the United States and al Qaeda.

The price of Pakistan's choices has been the "loss of life of American soldiers in Afghanistan," the vice president said. Islamabad has "been very helpful in other times," he added. "But it's not sufficient. They have to get better. We need a relationship that is born out of mutual interest. And it's in their interest that they be more cooperative with us."

"We are demanding it," he said.

Al Qaeda leader Osama bin Laden was killed by U.S. forces in a compound in Abbottabad, Pakistan, in May. Pakistan's government -- which has struggled with significant pro-al Qaeda sentiment within its borders -- was not informed of the attack beforehand.

Pakistani authorities insist they did not know bin Laden's location.

Despite troubles in Pakistan and elsewhere, the United States is "getting close" to bringing about an end to organized, legitimized terrorist activities, Biden said.

"We have done great damage to ... al Qaeda," he said. "Satellite organizations" have emerged in Somalia and elsewhere, he said, but "they are less coordinated" and "less capable."

"And we're relentless in pursuing them," he added.

As a result, Americans are safer today than they were a decade ago, Biden asserted.

Regardless, the vice president cautioned that "there is always a possibility of a lone wolf" attack within the United States or elsewhere.

"There's always a possibility of an incident occurring, but I do not believe there's anyone right now capable of putting together the kind of extremely complicated planned operation that took place on 9/11," he said.

Biden said he believes that in 25 years, Americans will "read about this period of terror as ... a part of a chapter in the history of this country."

The vice president denied former Vice President Dick Cheney's assertion that controversial interrogation techniques such as waterboarding -- stopped by the Obama administration -- would help generate useful intelligence in the war against al Qaeda and other organizations.

"I've seen zero evidence that it works, and I think there's abundant evidence that it hurts us internationally. It hurts our security," Biden said. It does so, he said, "by making a mockery of who we say we are and giving rationale for those who want to do us harm to recruit people."