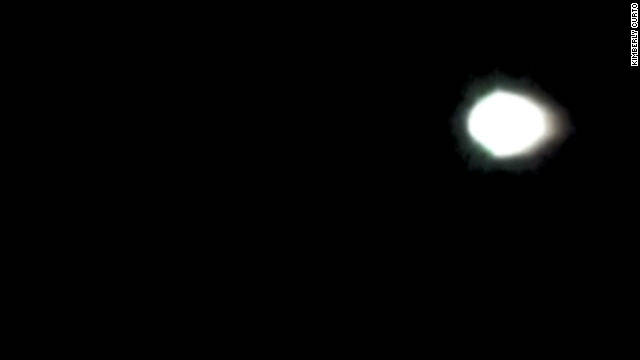 Go to CNN affiliate's KCAL, KPHO and KSWB to read more about the mysterious light.

(CNN) -- The streak of light that blazed across southwestern U.S. skies and stoked burning curiosity across the social media landscape was probably a tiny and bright meteor known as a fireball, a NASA spokeswoman said Thursday.

Veronica McGregor, spokeswoman at NASA's Jet Propulsion Laboratory, called it a rarely seen and exciting treat for the legions of people who glanced to the heavens on Wednesday night.

Law enforcement and media in Phoenix, Los Angeles and Las Vegas were fielding calls of the reported sighting. It quickly became a hot topic on a number of social media websites with most asking, "Did you see it? What was that?"

"For all the millions of people that called, they can scratch that off their bucket list. They are very lucky to see a fireball," McGregor said.

McGregor told CNN the object eyeballed in the sky on Wednesday night was probably the size of a baseball or a basketball, based on descriptions reported to police and across the internet.

The fireball was a tiny chunk of an asteroid that became a meteor when it hit the atmosphere, McGregor said. While it probably incinerated before it reached ground, it's not impossible that a pebble-sized meteorite survived the trip.

McGregor said such small objects pose no danger but noted that scientists are regularly keeping their eyes on asteroids that could cause issues.

"Fireballs are actually extremely common," she said. "They happen every day somewhere over our globe."

Many officials initially theorized the object was a meteor.

Lt. Justin Griffin of the Maricopa Sheriff Department in Arizona was trying to guess what the strange light was and said he believes "it was a meteorite travelling from north to south across Maricopa County.

He said the 911 call center received a flood of calls, but there were no reports of impact or damage.

"People are, indeed, reporting they saw a light head from west to east across the sky. We got reports from CHP and the FAA about callers seeing the light. It is reasonable to say that it may be a meteor," Curt Kaplan, a meteorologist with the National Weather Service, told CNN affiliate KCAL.

There were no reports of aircraft incidents across Southern California, Ian Gregor, a Federal Aviation Administration, spokesman said.

NASA officials have announced the now-defunct Upper Atmosphere Research Satellite is expected to fall back to Earth in the coming weeks, but that is expected to happen in a week to 10 days, NASA spokesman Steve Cole said.

Fireballs generally go unnoticed because they whiz over oceans and uninhabited regions, according to the American Meteor Society.

Also, the society said, "those that occur at night also stand little chance of being detected due to the relatively low numbers of persons out to notice them."

But they can grab attention when they streak during the evening hours above a highly populated area.

The society says "the brighter the fireball, the more rare is the event."

McGregor said, "We think everybody should have the opportunity to see a fireball."

CNN's Rosalina Nieves and Chuck Johnston contributed to this report.