The jobless in New Jersey find refuge in Tent City 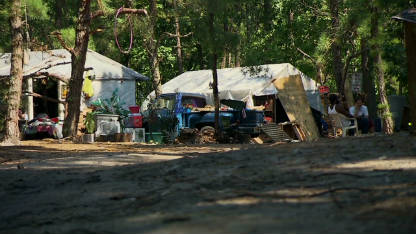 Lakewood, New Jersey (CNN) -- Cars and trucks cruise along Cedar Bridge Avenue, drivers listening to radio anchors reporting the headline that a record 46 million Americans are living in poverty, while 50 feet from the bustling boulevard, hidden by the woods that border the road, lies a shocking example of that shameful statistic.

Behind the trees, six dozen homeless Americans have set up camp, in tents, teepees and huts, residents of what they call Tent City. It's a place where those out of work and out of luck can drop out of society while living as cheaply as possible.

"It's a community here," said the Rev. Steven Brigham, who founded Tent City in 2006 as part of his Lakewood Outreach Ministry Church. "They have a sense of belonging."

In the past year Brigham has seen Tent City's population nearly double as the jobs recession drags on.

Angelo Villanueva jabs at a homemade punching bag he hung from a tree -- a plastic bag filled with dirt wrapped with tape. It's a "stress reliever," said Villanueva. He's a skilled mason who worked construction jobs for nearly two decades, then fell victim to a sucker punch from the housing collapse. Villanueva, also an artist who has been drawing sketches of Tent City, never dreamed that he'd be among the nation's homeless. 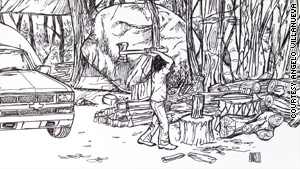 Joe Giammona, an unemployed handyman, drinks from a can of Pepsi as he watches a neighbor cook sausage and eggs on a communal grill. Giammona moved here five months ago after a shooting near the rooming house where he previously lived in Asbury Park, New Jersey. He says he's constantly searching for a job but hasn't been able to catch a break.

"It just seems like every door is shut in my face. You know there's nothing hiring. I always hear that things are slow right now. 'Come back in the fall, come back in the spring,' and then when I come back to these places it's always an excuse after an excuse. You can't get hired anywhere," said Giammona. "I would take anything right now, anything that's willing to hire."

Brigham receives donations from individuals, churches and synagogues that he says allow him to operate Tent City for about $1,000-a-month.

Loaves of bread are piled on a communal table, next to plastic garbage bags filled with clothing. Cans of food sit neatly in a wooden pantry. Residents are free to take what they need.

There are makeshift solutions to conveniences that most people take for granted. A power generator is connected to a pump that delivers groundwater to a both a shower and washing machine. Nearby sits a hot water heater that works off a propane tank.

"They've got all their needs met here," said Brigham. 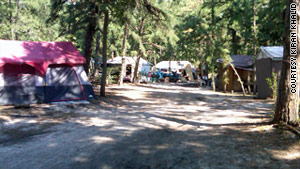 Six dozen homeless Americans have set up camp, in tents, teepees and huts, residents of what they call Tent City.

Tent City residents recycle plastic bottles. The township picks up garbage once a week. But, that's as much help as local government provides. Lakewood Township is suing Brigham and his Tent City residents to get them off public lands.

Lakewood Township referred CNN's inquiry to its attorney, Jan L. Wouters, who did not return phone calls and e-mails.

Brigham, with the help of a private attorney who is donating his time, has been battling the suit.

"The government has a responsibility to be sympathetic to the plight of the poor and to the homeless. And to push them out is cruel, it's cruel and unusual. It's cold-hearted," said Brigham.

The two sides had reached a temporary agreement that required Brigham to dismantle some of Tent City's structures. But, at a hearing this week Lakewood Township gave notice it intends to move forward with its legal effort against the encampment.

Ocean County, where Lakewood is located, provides shelter for the homeless in motels and hotels, as well as a shelter in Atlantic City (which is in Atlantic County), according to Jean Cipriani, attorney for the Ocean County Board of Social Services.

"The county has no position on Tent City," said Cipriani.

Tent City residents are hopeful they'll be able to remain in their community, even through the winter. That's what Marilyn and Michael Berenzweig did last year. Marilyn, a textile designer who worked in New York just two years ago, and her husband Michael, a former public radio producer, have been living here for 16 months, with fading hope of finding employment.

"It's very hard for a company to decide to use a 61-year-old trainee. I'm too young for Social Security. It's going to be a rocky flight. It's been a rocky flight," said Marilyn Berenzweig.