By Pat Caputo, Special to CNN 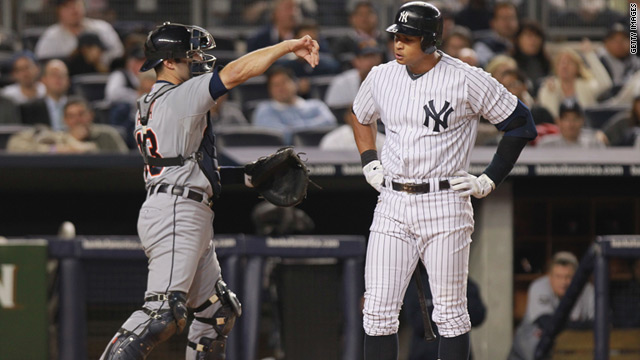 The Detroit Tigers defeated the New York Yankees at Yankee Stadium on Thursday to advance to the ALCS.
STORY HIGHLIGHTS
RELATED TOPICS

Editor's note: Pat Caputo is a sports columnist for The Oakland Press in Pontiac, Michigan, and a radio talk show host for 97.1, The Ticket in Detroit. Caputo has covered both the Detroit Lions and Detroit Tigers for more than 20 years.

Detroit (CNN) -- Thanksgiving Day 2008 shows where Detroit has been.

The Detroit Lions have played at home every Thanksgiving since 1934. It is the city's greatest football tradition.

Yet instead of a source of great pride, the game had become an embarrassment, as well as representative of everything going horribly wrong in Detroit.

The auto industry melted down with alarming and unprecedented speed. The City of Detroit was rife with political scandal that eventually put Mayor Kwame Kilpatrick and several other prominent public officials behind bars.

All this turmoil came while the Lions were poised to be the only team in NFL history to go 0-16. The sentiment? The Lions were viewed as incredible losers in the NFL landscape, so we must be incredible losers, too. However, the fans maintained their love for the team in spite of their obvious difficulties.

The Tennessee Titans ended up thrashing the Lions, 47-10. Tennessee's defensive coordinator that day was Jim Schwartz. Less than two months later, he was the Lions' head coach.

"I don't remember much about the game other than we had our concerns about winning it, but I do recall the drive into the city." Schwartz said. "You could just see and feel what was happening at the time. It was eye-opening."

That was in stark contrast to what is happening in Detroit three years later. In 2011, the Lions are 4-0 for the first time since 1980. Their matchup Monday night against Chicago at Ford Field is perhaps the most anticipated football game the Lions have played since they advanced to the NFC championship game in 1991.

Meanwhile on the mound in Detroit, the Tigers are also showing amazing promise. In a thrilling game, the Tigers beat the New York Yankees 3-2 on Thursday to advance to the American League Championship Series.

The Tigers did capture the AL pennant in 2006 -- eliminating the Yankees -- but had been a high-payroll, low-achieving club since until this summer, when they ran away with the AL Central title.

The pressure to deliver the division title this season was so intense that on the night the Tigers clinched, tears welled in manager Jim Leyland's eyes as he was interviewed by Fox Sports Detroit team broadcaster Mario Impemba.

"At times like this, sports teams can lift the spirits of their fans," Leyland said, his voice cracking. "I hope we uplifted their spirits, because they deserved it."

At this moment in Detroit, it seems like both teams, the Lions and Tigers, are lifting each other's as well as this city's spirits.

"We're all allies," Leyland said. "We're pulling for one and another. Good atmosphere for the city. Makes people forget about their troubles with good times with sports."

The success of the Lions and Tigers has hardly made the city's problems go away.The 2010 census numbers revealed that Detroit's population dropped to 713,777. Detroit had once been the nation's fourth largest city, with more than 1.8 million people.

Michigan was the only state in the nation to have a net loss in population since the 2000 census. There are entire blocks of Detroit that are nothing but vacant houses.

Violence is also a major issue. In one 24-hour period on an August weekend, 16 people were shot and seven killed.

Yet there are some signs of hope in the economy. The auto industry seems to be doing better. Ford Motor Co. stock is up nearly 11 times its value at the depths of the meltdown, while General Motors is trading publicly again and reporting profits.

Chrysler is reportedly turning a profit, too, and is still reaping the benefits from its Super Bowl commercial featuring Detroit's own Eminem. The ad references "hard work, conviction and a know-how that runs generations deep in every last one of us." It seems to sum up the feelings of pride in spite of circumstance felt by the residents of the state.

What makes 2011 different? The Tigers' magical summer is being followed by a surprisingly solid performance from the usually underperforming Lions, behind a triple threat of quarterback Matthew Stafford, wide receiver Calvin Johnson and defensive tackle Ndamukong Suh.

The Lions won both games, representing the city's come-from-behind spirit and fight to win in the midst of adversity.

This tenacity is not lost on Schwartz, the coach, who has seen the Lions at their worst and now their best.

"When I became the Lions coach, it didn't take me long to understand what the team means to the people here," Schwartz said. "No matter how bad it has been, they have never stopped caring. They are vocal but never apathetic. It's like a lawn that has been dormant. It just takes one good watering, and it's back."

Eminem's tag line in January's Chrysler ad -- "that's who we are. That's our story" -- sums up the motivation for these teams who know that the wins are helping Detroit's image and giving residents a sense of hope and pride that's been missing.

It seems that Detroit is back -- for now.