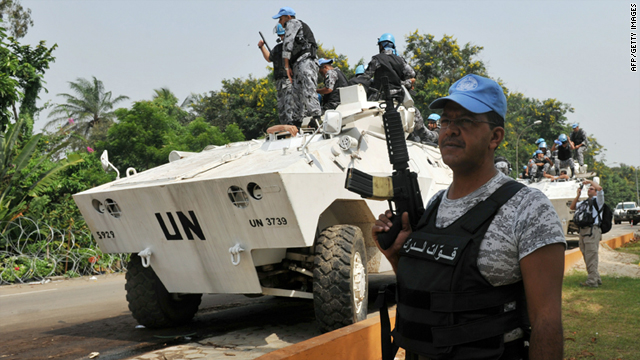 Abidjan, Ivory Coast (CNN) -- A new year opened with intransigence in a divided Ivory Coast, as two political rivals ignored threats and deadlines Saturday for one another to step down.

Self-declared President Laurent Gbagbo's camp had called on Ivorians to surround President-elect Alassane Ouattara's hotel headquarters in Abidjan. And Ouattara had warned Gbagbo that if he did not relinquish power by midnight Friday, there would be no amnesty deal.

But neither man budged.

"Again, my opponent did not win," Gbagbo said in a New Year's address, according to the Ivorian Press Agency.

Read how the stalemate is rooted in years of conflict

Three heads of state representing a West African regional bloc that tried to resolve the situation earlier in the week are scheduled to return to Abidjan on Monday. The delegation from the Economic Community of West African States (ECOWAS) will attempt again to persuade Gbagbo to concede.

Ouattara has been recognized internationally as the legitimate winner of the November 28 runoff election. The United States, the United Nations, the African Union and the European Union have all accepted Ouattara as the president-elect and he, in turn, has formed a government and made new diplomatic assignments.

Gbagbo said in an interview with Eurovision that the international response was illegal.

"What the West is arguing for is not legal. It is imposing the will of the powerful on somebody else," he said. "I don't agree with it."

ECOWAS has said that as a last resort, it will consider forcing Gbagbo out with military might, if its appeal to Gbagbo fails again. The regional bloc's defense committee will meet in Mali January 17-18 to finalize a military option.

Charles Ble Goude, a minister in Gbagbo's cabinet, reiterated calls for Ivorians to surround the Golf Hotel, where Ouattara has been holed up since the election and where United Nations security forces are based.

The United Nations warned Gbagbo that it would "repulse and defeat" any attack by his partisans on hotel, and that the world would hold him personally accountable for human rights abuses.

"We are heavily armed and present and preparing ourselves," he said of the 9,000-strong peacekeeping mission in Ivory Coast. "They will be defeated, they will be repulsed. There is no doubt about this. I hope (Mr. Goude) will not step into this fatal minefield."

Choi, however, said he had no signs of an impending attack.

Ban called Ouattara in a sign of support on Saturday, saying the United Nations "remained committed to work together for a peaceful and durable end to the stalemate," according to a statement. The secretary-general also expressed alarm over egregious human rights violations, the statement said.

Gbagbo on Saturday reiterated his call for U.N. soldiers and the French troops that back them to leave the country. He accused them of firing on civilians, wounding two people.

"It is not acceptable that U.N. forces shoot on civilians," Gbagbo said on state RTI television. "That is why I am asking them to leave.

On Wednesday, U.N. forces clashed with a hostile crowd in Abidjan. The force said its soldiers only fired warning shots and denied they shot directly at the crowd.

Gbagbo wants an an international committee to recount the vote.

Guillaume Soro, who was picked by Ouattara to be prime minister in his government, said Gbagbo is running out of time.

"This is the last chance for Mr. Gbagbo to obtain the possibility of a peaceful power transition and a guarantee of immunity," said the former rebel leader.

Journalists Eric Agnero and Gemma Parellada contributed to this report.