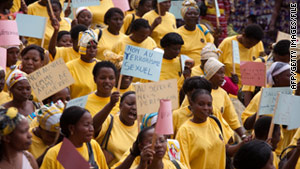 Women denounce sexual violence in an October march in the Democratic Republic of the Congo city of Bukavu.
STORY HIGHLIGHTS

(CNN) -- Dozens of women were raped in a coordinated attack in the Democratic Republic of Congo on New Year's Day, Doctors Without Borders said Thursday.

The humanitarian agency said 33 women were raped in Fizi, South Kivu, in the eastern part of the war-torn country.

"Women had been restrained with ropes or beaten unconscious with the butt of a gun before being attacked, some in front of their children," said Annemarie Loof, an official with the agency, commonly known by its French name, Medecins Sans Frontieres.

"Up to four armed men were involved at a time and homes and shops were looted," she said in a statement.

Rape is a frequent weapon of war in Congo, the United Nations says.

Congo rapes: What did the U.N. know?

It has named the Democratic Republic of Congo the "rape capital of the world," with 15,000 women raped in eastern Congo in 2009. The attacks occurred in parts of the country where armed rebel groups moved into areas considered to be pro-government but lacking in army or police protection, according to the United Nations.

Many rape survivors took to the streets in October to speak out against sexual violence.

"My heart is in pain. Why are you raping me?" sang the rape victims, many of whom left hospital beds to join the march in eastern Congo.

The preliminary report confirmed the rape of at least 303 civilians between July 30 and August 2 in the Walikale region of Congo's North Kivu province.

And the rapes have clearly not stopped, Medecins Sans Frontieres said.

"MSF is extremely concerned about the current situation in and around Fizi," Loof said Thursday. "People are fleeing the area fearing further violent attacks."

The agency provided medical and psychosocial care for 5,600 rape victims in North and South Kivu in 2009, it said.