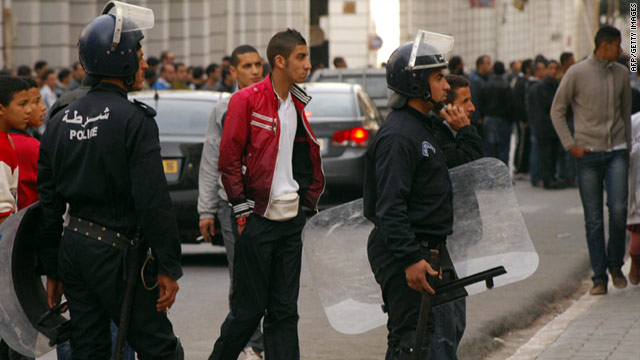 An Algerian soccer league canceled its weekend matches after riots over rising food prices across the country this week.
STORY HIGHLIGHTS
RELATED TOPICS

(CNN) -- A national soccer league in Algeria has canceled matches scheduled for Friday and Saturday after riots in the capital and elsewhere this week.

The Algerian National Football League announced the cancellations in Al Watan, a local newspaper. The matches were canceled in an effort to prevent large groups of young people from gathering.

The streets were mostly calm in the Algerian capital on Friday, and many imams appealed for calm during morning prayers.

Rising prices for food staples like milk and sugar sparked protests in the nation this week, and some fear more violence will erupt.

Algerian Minister of Trade Mustapha Benbada said the price of staples will go down next week, but he did not provide any further details

The demonstrators were mostly young men.

"They are burning tires, breaking into buildings, breaking everything. ... We can hear the screams," journalist Lania Tagzout said a few days ago.

Adding fuel to the protesters' anger are the high rates of unemployment and housing issues, socioeconomic problems that have been festering for some time.

The demonstrations began Tuesday night, and are largely are unorganized, without any clear leaders, Tagzout said

There have been injuries among the protesters as well as police, but authorities aren't disclosing any numbers, she said. Police aren't engaging the demonstrators so far, but are using tear gas to contain them.

And even though businesses are shuttered and many people are staying off the streets in the capital, there's not much anger toward the protesters, she explained.

"Everyone understands that things will only change through violence."