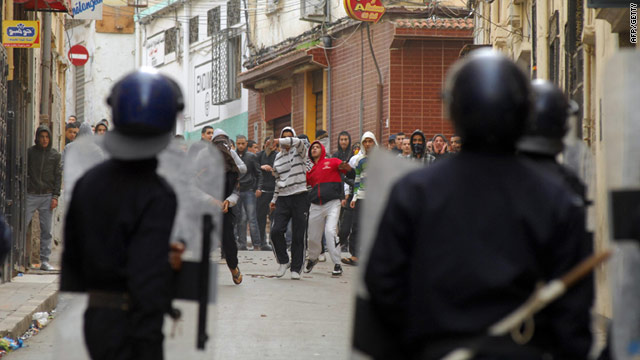 (CNN) -- At least three people have been killed and 300 others injured in riots that erupted across Algeria amid rising food prices and a housing crisis, according to state-run media.

The protests began last week over spiraling costs of basic food items, including milk, oil and sugar. Some staples are subsidized by the government.

To curb the escalating prices of sugar and oil, the government slashed duties for sugar and oil by 41%, Algerie Press Service reported Sunday. The suspension and exemption from customs duties and taxes until August 31, according to APS.

Meanwhile, the government reports a third person has died from the rioting: "I can confirm the deaths of three young people in M'sila, Tipasa and Boumerdes," Interior Minister Daho Ould Kablia told the television channel Canal Algerie, according to APS.

"In the first two provinces, the dead corpses were found during the riots. Investigations are underway to determine the causes." The third person was found burned in a hotel set on fire by the rioters, he added.

U.S. State Department spokesman P.J. Crowley has said Washington was monitoring the situation in both countries. The Tunisian ambassador was summoned to the State Department.

Adding fuel to the protesters' anger are the high rates of unemployment and housing issues, socio-economic problems that have been festering for some time in Algeria.