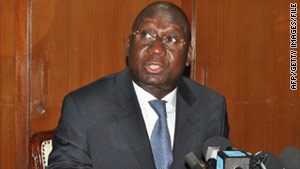 Ivory Coast has been in a political crisis since Laurent Gbagbo's refusal to step down.
STORY HIGHLIGHTS
RELATED TOPICS

Ambassador Youssoufou Bamba said President-elect Alassane Ouattara would not enter a power-sharing government similar to that in Zimbabwe but that he would be open to a unity cabinet.

U.N. spokesman Farhan Haq could not confirm any such offer from the Quattara government and said that Secretary-General Ban Ki-moon still called for Gbagbo to step down in favor of an orderly transition.

The cocoa-producing West African nation was plunged into crisis when Ouattara was declared the winner of the November 28 presidential runoff election, but Gbagbo, the incumbent, refused to leave office.

The U.S. Treasury froze Gbagbo's assets in the United States last week and barred Americans from doing business with him. His wife and three top aides also were sanctioned.

Ouattara told CNN last week that he welcomes a proposal for direct negotiations with Gbagbo -- on the condition that Gbagbo recognize Ouattara as president.

Ouattara remains holed up in a waterfront hotel under the protection of U.N. peacekeepers.

An independent election commission declared Ouattara the winner of the runoff election in November, but Gbagbo said that the commission was not authorized to declare a winner, and he endorsed the country's Constitutional Council when it declared him the winner.

The United Nations and an ever-increasing number of other nations have recognized Ouattara, a former prime minister, as the rightful winner.

Gbagbo, however, has ignored those offers and has refused to accept telephone calls from U.S. officials.

Ouattara has said he will ensure protection for Gbagbo if he concedes, said Kenyan Prime Minister Raila Odinga, the African Union envoy for a multinational mediation effort.