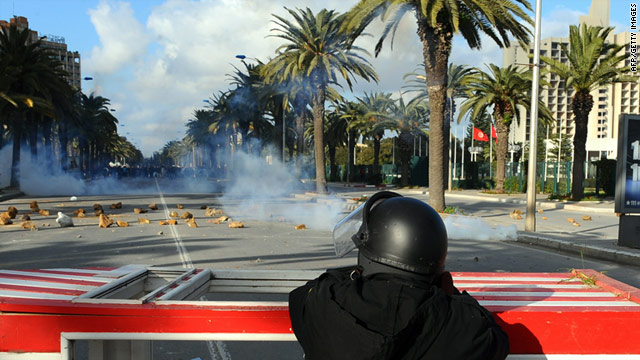 It happened with breathtaking speed. Within a matter of weeks, Tunisia went from being a beacon of authoritarian, pro-Western stability to a country in open, nationwide revolt. A largely leaderless, spontaneous popular movement drove the head of state from power.

At the moment it's not clear whether that movement will result in real change, or just a change at the top.

Shortly after Friday's massive demonstrations in Tunis, which reached a crescendo outside the hated Ministry of the Interior on Avenue Mohamed V, President Zine El Abidine Ben Ali fled the country, taking refuge in Saudi Arabia.

The army and security forces are trying to impose order in Tunis. Tanks and armored personnel carriers have been deployed on one of the capital's main thoroughfares, Avenue 7 Novembre (named after the date when Ben Ali assumed presidential powers in 1987). At midday Saturday, I watched as two truckloads of soldiers pulled up on the avenue and began stringing out barbed wire.

A dusk-to-dawn curfew is being ruthlessly enforced -- just how ruthlessly, I saw from my hotel window. At midnight. a plain-clothes policemen beat with batons and kicked a young man to the ground. All the while the man screamed, "Have mercy on me!"

This afternoon, the front desk called to tell me to close my window on orders from the police.

In the Place de l'Independence, I watched municipal workers taking down a large poster of Ben Ali. There was no cheering, no celebration. The few people in the square appeared more concerned with getting home before the curfew began.

The feel is very much that of a military takeover. It's hard to catch a whiff of what is being called the Jasmine Revolution.

Mounting fear of chaos is diluting the unbridled joy inspired by Ben Ali's departure. Fires have broken out in prisons in Muntasir and Al-Mahdia. There are reports of gangs on looting sprees.

Tunisian television has discontinued regular programming, replacing it with a call-in program. The prime concern of callers from around the country is that law and order are breaking down.

On back streets in the center of Tunis, away from the soldiers and plain-clothes police, people are still seething with anger at Ben Ali. They complain of rampant corruption and nepotism by him and his clique, of deteriorating economic conditions, rising prices, high unemployment and a lack of job opportunities for university graduates.

Everything they complain about plagues many other Arab countries. In Egypt, President Hosni Mubarak has been in power since 1981. But he's a relative newcomer compared to Libyan leader Muammar Qaddafi, at the helm since 1969. In Yemen, Ali Abdallah Saleh has ruled since 1979.

All of these aging autocrats must be pacing the floors of their palaces worrying that the unrest in Tunisia will spread. Conditions in countries like Egypt are, if anything, far worse than in Tunisia. In Egypt, for example, it's estimated that 40 percent of the population has to get by on less than $2 a day. Unemployment is rampant, high-level corruption a given.

In the spring of 2008, thousands of Egyptians took to the streets to demonstrate against spiraling food prices. In the Nile Delta city of Kafr Al-Shaikh, protesters burned huge posters of Mubarak.

Ever so briefly it appeared his regime was beginning to totter, but then it passed. The government announced wage increases, scrambled to ensure a supply of subsidized bread for the poor, and rounded up the troublemakers one by one.

Middle Eastern rulers are masters at outsmarting their opponents and quashing protest. They're far less skilled when it comes to addressing the problems that plague their people.

Revolution -- real revolution resulting in an overthrow of the existing order along the lines of 1979 Iran, is far less probable.

The Jasmine Revolution, which inspired so many angry and frustrated people across the Arab world, is already in danger of being trampled by jackboots.