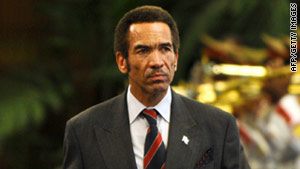 (CNN) -- The president of Botswana has invited the internationally recognized president of Ivory Coast, Alassane Ouattara, for an official state visit, the Foreign Affairs Ministry of Botswana announced Wednesday.

President Seretse Khama Ian Khama has discussed the visit with Ouattara, the ministry said in a statement, and the two leaders "agreed that the visit should take place at a mutually convenient time."

But it's not clear when that time may come, since Ouattara is virtually blocked inside the Golf Hotel in Abidjan, Ivory Coast, by troops sent by Laurent Gbagbo, who claimed the presidency after the November 28 runoff.

While an independent electoral commission declared Ouattara the winner, the country's Constitutional Council invalidated the results in some provinces and proclaimed that Gbagbo, the incumbent president, had won. Gbagbo is refusing to step down

"Botswana continues to support all efforts aimed at ensuring that Ouattara assumes the presidency in Cote d'Ivore," the ministry statement said, using the French name for the country.

Immediately after the election in Ivory Coast, Botswana joined the African Union, the United Nations, the European Union and the United States in endorsing Ouattara as the winner of the disputed presidential elections.

At the time, Khama's government called upon all political entities, including the Constitutional Council of Ivory Coast, to respect the decision of the Independent Electoral Commission in declaring Ouattara the rightful winner of the elections.

"The government of Botswana is deeply concerned about African leaders who reject elections results that are not in their favour.

"Such actions not only deny people the right to have leaders of their choice, but also thwart efforts to maintain peace and security on the African continent," the statement from the Ministry of Foreign Affairs and International Cooperation says.

Botswana took similar actions two years ago after controversial parliamentary and presidential elections in neighboring Zimbabwe, declaring that Robert Mugabe was not democratically elected and saying it would not recognize him as that country's leader. Botswana officials also vowed not to attend any AU or Southern African Development Community (SADC) meetings if Mugabe was invited.

However, the government of Botswana softened its stance after Mugabe and his rival, Morgan Tsvangirai, formed a national unity government to ease Zimbabwe's economic and political predicament.

Botswana also did not recognise the leadership of Andry Rajoelina, after he was sworn in early last year as the transitional president of Madagascar. The government of Botswana issued a statement saying the former disc jockey and mayor of Madagascar's capital should hand over power to the constitutionally elected leader Marc Ravalomanana. Rajoelina and his military-led supporters forced Ravalomanana to step down, and although Rajoelina entered into a power-sharing agreement, it has yet to be implemented.