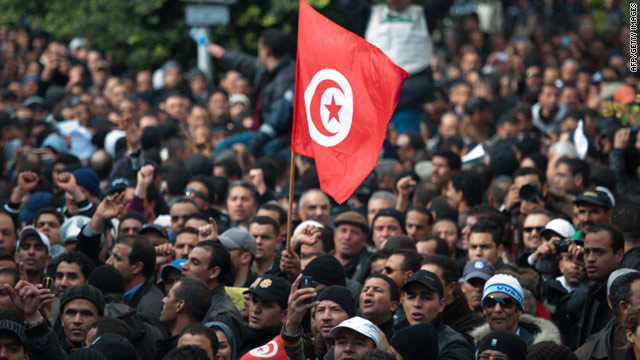 President Ben Ali was ousted in a rebellion a week ago after ruling the north African nation for 23 years.
STORY HIGHLIGHTS

As the mourning period came to a close, small protests broke out in the capital, Tunis.

They have called it a sham, and demanded that officials with connections to the old guard be fired.

The nation's interim prime minister said that his country would hold its first free democratic elections since gaining independence and vowed to leave politics after the ballot.

"We want to make the next elections the first transparent and legitimate elections since independence," Tunisian Interim Prime Minister Mohammed Ghannouchi said Friday.

Ghannouchi said he will retire from politics after the elections are held.

Tunisia gained independence from France in 1956.

Ghannouchi said upcoming political reforms would "scrap all undemocratic laws including laws involving political parties, the elections and the anti-terrorism law that was abused by the former regime."

"I lived like all Tunisians, in pain and fear" under the former president, Ghannouchi said.

Ben Ali was ousted in a rebellion a week ago after ruling the north African nation for 23 years.

Ghannouchi resigned from his ruling party this week and was appointed interim Prime Minister by the interim President Fouad Mebazaa.

Ben Ali's Constitutional Democratic Rally's central committee was dissolved last week. All Cabinet members who belonged to the party have quit it.

The party, known as the RCD, suffered a major blow earlier this week when Ghannouchi and Mebazaa submitted their resignations from the party, though they remained in the government, Tunis TV reported.

More than 100 people were killed in protests that followed over the past five weeks, the United Nations said.