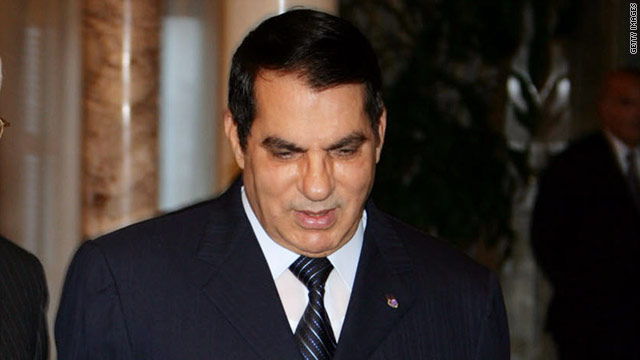 (CNN) -- The restive North African nation of Tunisia has issued an international arrest warrant for its ousted president, his wife, and several members of their families, Tunisian media reported.

Tunisian Justice Minister Lazhar Karoui Chebbi on Wednesday announced that the warrant had been brought against Zine El Abidine Ben Ali, according to Tunis Afrique Presse, or TAP, the country's official news agency.

Chebbi said the warrant is based on several charges, including carrying weapons and ammunition in Tunisia without licenses, maintaining and exporting foreign currency illegally, and inciting armed violence between Tunisians.

Chebbi said some family members have been arrested and others are still at large, and that others could be arrested as the investigation continues.

Interpol, the international police agency, confirmed that its National Central Bureau in Tunis has issued a global alert "to seek the location and arrest Ben Ali and six of his relatives."

Citing media reports, it said Ben Ali and some of his family members are wanted "on charges of alleged property theft and the illegal transfer of foreign currency."

The National Central Bureau is asking its "member countries to search, locate and provisionally arrest" Ali and the relatives with a view to their extradition to Tunis."

"If and when the individuals are located, Tunisian authorities will forward any formal request for extradition via diplomatic channels," Interpol said.

Ben Ali, who ruled Tunisia since 1987, fled to Saudi Arabia earlier this month amid mass public protests against the government for corruption, poor living conditions, high unemployment and repression.

The grass-roots protest has emboldened people in Egypt and Algeria to take their complaints to the streets.

It also has generated admiration across the world. For example, in his State of the Union address on Tuesday night, President Barack Obama made reference to Ben Ali's rule, saying "the will of the people proved more powerful than the writ of a dictator."

An interim government was formed after Ben Ali's departure, and protesters are demanding that none of the people in the government should have links to the ousted president's regime. Changes in the government makeup were expected on Wednesday, TAP reported.

Within the ruling circles, there is empathy for the protesters. TAP reported that Noureddine Hached, Tunisia's ambassador to Japan, resigned from his post "in solidarity with the Tunisian people and their martyrs." He is preparing to return to Tunisia.

The government will provide compensation to the families of people who died in the recent unrest and others who were injured. It will also pass along aid for jobless higher education graduates, TAP reported.

More than 100 people were killed in protests in recent weeks, the United Nations has said.

There have been protests regularly in Tunisia, which gained its independence from France in 1956 and has many links to the country. France's Agence France Presse reported on Wednesday that one of its journalists saw about 200 protesters throwing stones at police.

Tunisians have expressed outrage over the actions of the president and his family.

But Tunis Afrique Presse reports that the curfew there has been narrowed to 10 p.m. to 4 a.m. starting Wednesday "as part of alleviating the state of emergency measures and in view of the improvement in the country's security situation."

Last week, Tunisia's new government interrogated more than 30 people from Ben Ali's entourage, a top official said Friday, while 1,200 others who have "spread terror among the population carried out unacceptable acts" have been arrested, TAP reported.

Tunisia's Interior Minister Ahmed Friaa announced the arrests in a news conference, saying that "33 members of families close to the former president have been brought to justice and are now being interrogated."

"These people's jewels and huge sums of money in their possession have been seized," the TAP news agency reported, citing Friaa, a holdover from the previous government.

Some of the 1,200 people arrested by the new government have been released, Friaa said, while 382 others face charges such as carrying illegal firearms, looting and committing violence.

Meanwhile, the U.N. High Commissioner for Human Rights Navi Pillay announced Wednesday that "a team of top-level specialists" from her office is assembling in Tunisia, and they will officially start a week-long assessment of human rights priorities on Thursday.

"Human rights abuses were at the heart of the problems faced by the people of Tunisia. Therefore, human rights must be at the forefront of the solutions to those problems," Pillay said.

It "will explore possibilities for the advancement of human rights in Tunisia and seek to gain a first-hand understanding of the human rights challenges," Pillay said.

"Its observations and recommendations will enable me to put together a set of concrete proposals for immediate and future action to improve the human rights situation in the country. It is important that we maintain the positive momentum established by the recent dramatic transformation of the political situation."