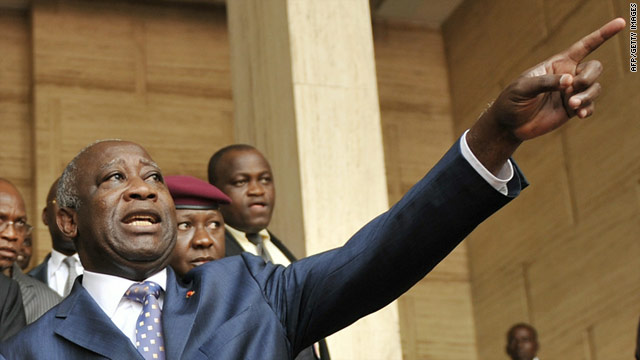 (CNN) -- A United Nations representative has condemned sexual violence in the Ivory Coast as the White House met with leaders urging the nation's incumbent leader Laurent Gbagbo to give up power.

"Following reports of rapes in Cote d'Ivoire, I condemn in the strongest possible terms the employment of sexual violence as a means to political ends," said Margot Wallstrom, a special U.N. representative on sexual violence in conflict.

"From preliminary information, it seems that the assaults follow carefully selected political targeting," she said in a statement Wednesday.

The United Nations and the international community have pressured Gbagbo to leave office, saying that Alassane Ouattara fairly won a contentious November election.

On Wednesday, the White House hosted leaders from the Economic Community of West African States (ECOWAS) to discuss the crisis in the country.

"Mr. Donilon expressed strong support for the efforts of ECOWAS to facilitate a peaceful transition of power in Cote D'Ivoire," the White House said in a statement.

"Mr. Donilon and the ECOWAS delegation reaffirmed their shared commitment to see that the winner of the recent elections, Alassane Ouattara, takes his rightful role as President of Cote d'Ivoire, and their shared resolve to see former President Laurent Gbagbo cede power," the statement said.

Cote d'Ivoire is the French name for Ivory Coast, a former French colony.

Human Rights Watch has accused Gbagbo of carrying out a "reign of terror" against his people.

"Security forces under the control of Laurent Gbagbo and militias that support him have, since late November 2010, committed extrajudicial killings, forced disappearances, torture and rape," the organization said in a news release.

Wallstrom urged investigations of sexual violence allegations and for perpetrators to be brought to justice.

"The security situation for women and girls unfortunately has deteriorated in the western parts of the country," since last year, she said.

"I call for urgent steps to be taken to avert the risk of increased sexual violence and to ensure the protection of civilians, especially women and girls," Wallstrom said. "I would also like to recall that the Security Council last December reiterated their readiness to consider patterns of sexual violence when imposing sanctions against parties."