Chaotic scene at symbol of state power in Egypt 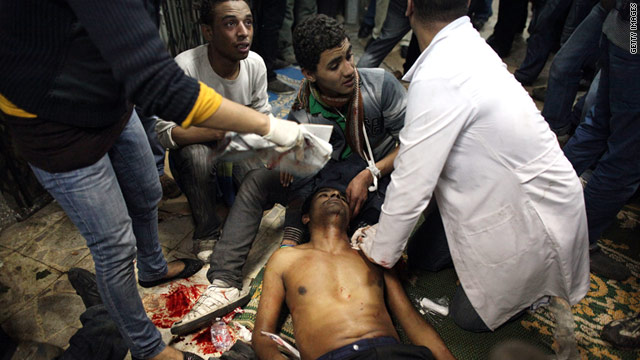 Medics in a mosque attend to a man injured Saturday during clashes with police in Cairo, Egypt.
STORY HIGHLIGHTS

Cairo, Egypt (CNN) -- Agitated Egyptians carried the wounded -- bleeding and in shock -- to a makeshift clinic on the doorstep of a mosque.

A young man's face turned green as a doctor in a blood-stained lab coat pulled up his shirt and began swabbing the puncture wounds in his stomach.

The man was among thousands of demonstrators who converged Saturday on Egypt's Interior Ministry, one of the most visible signs of state authority in Egypt. They pressed against police lines despite shotgun pellets and tear gas in a chaotic scene that left people spitting up blood and stumbling down crowded streets.

Chanting men carried one man's body, wrapped in an Egyptian flag, away from the turmoil. He had been shot at the Interior Ministry, a weeping man said.

The clashes killed at least one person and left 60 others hurt in three hours Saturday afternoon, said Dr. Radab Ali, who was treating the injuries at the mosque. Another doctor at the mosque said five people had died.

"We tried to go to the Interior Ministry building," said Emad Hamdi, a young man with a white bandage on his left cheek. "They started shooting us."

Tear gas in the air in Alexandria

The bloodshed around the Interior Ministry contrasted sharply with the festive scene not far away in Cairo's Tahrir Square, where cheering crowds climbed on Egyptian military tanks and men and women lay smiling and chatting on the grass.

Even though police had disappeared from much of the rest of Cairo after days of protests, they had surrounded the Interior Ministry and were firing on protesters with rubber bullets, tear gas and live rounds, according to journalist Ian Lee, who witnessed the clash. He described the situation as something of a last stand for the authorities at one of the country's last symbols of the Mubarak regime.

"That is their headquarters," he said. "If that falls, then, as many protesters here would say, that would be like a checkmate."

Lee described a back-and-forth scene as a sea of protesters would surge towards the ministry building, only to have police set up on rooftops and adjacent alleys, open fire and push them back.

"It's so loud and it's so frequent," Lee said of the gunshots. "You're hearing it continuously in the background, the thud of gunshots and of tear gas."

Despite the live fire, protesters said they will not stop until the ministry building is torched.

"This is the last stand," said one young protester. "The building symbolizes what many Egyptians see as the abuse, torture and corruption that were rampant in the police force."

The violence took its toll.

One man spat up blood as others dragged him away with an apparent gunshot wound to the head. Another stumbled down crowded streets, also spitting blood.

Ambulances couldn't get through the thick crowds to evacuate the wounded.

"Egypt has been under emergency rule for the last almost 30 years now and the police have been able to do almost whatever they would like without consequence, and the people are now responding to that." Lee said. "This is a huge symbol for people."