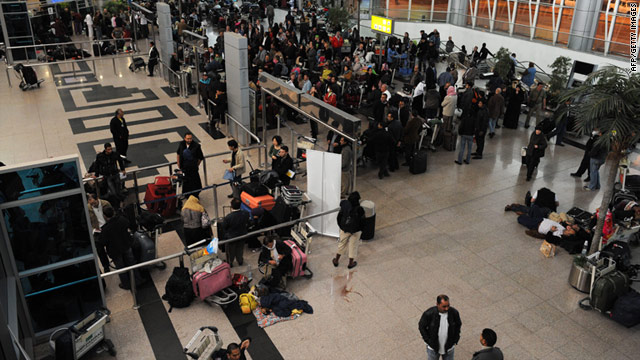 People trying to get flights out of Egypt crowd Cairo International Airport on Sunday.
STORY HIGHLIGHTS

(CNN) -- The escalation of protests across Egypt on Sunday has prompted businesses and governments to evacuate their citizens and clients from the country.

The U.S. Embassy has been closed indefinitely, according to embassy spokeswoman Elizabeth Coulton, although it is offering 24-hour emergency assistance.

PBS travel-show host Regina Fraser, currently in Egypt filming an episode of her show "Grannies on Safari," has been frustrated by the lack of information.

"I'm going to tell you briefly that I contacted the embassy here two or three days ago, and no one answered. No one answered," said Fraser. "The phone just kept ringing."

The information pipeline has improved with the addition of more people to take calls and handle e-mails, the U.S. State Department said Sunday.

The staff of the Cairo Embassy has been overwhelmed by inquiries and the State Department now has a 24-7 task force and call centers, said Assistant Secretary of State Janice L. Jacobs. Radio and TV, along with websites and telephones, are being used to provide travel updates, she said.

Charter flights will begin taking thousands of government dependents, nonessential employees and private American citizens out of Cairo on Monday.

Officials are looking at Istanbul, Turkey; Nicosia, Cyprus; and Athens, Greece, as possible destinations, although the list was not finalized Sunday afternoon, Jacobs said.

Fraser is currently stranded on a Nile River cruise boat in Luxor. She said someone at the embassy picked up the phone on Sunday and transferred her call to a recording advising callers to visit the U.S. government website.

"There is no internet here in Egypt," Fraser said. "How could I find out information if the internet is not working?"

Fraser said she wasn't aware that flights to the U.S. would be available on Monday until informed by CNN.

"Many people just want to get out," Fraser said.

Laura Murphy, a fellow river cruise passenger, told CNN that the ship's captain anchored the boat in Luxor after being warned against docking at any of the stops along the Nile because those areas may be unsafe for tourists.

Murphy said two men with plane tickets to Cairo were stuck in Luxor because the plane never showed up.

"You cannot get away by water. You cannot take public transportation because it is unsafe and you cannot fly," Murphy said. "I'm safe but trapped."

"We right now are asking people to limit their movements as much as possible and wait for the additional information that we will have on the charter flights that will be leaving," said Jacobs.

Jacobs called on friends and family members with internet access to try to contact their loved ones in Egypt to give them online information that tourists in Egypt currently cannot access.

U.S. Secretary of State Hillary Clinton told NBC's "Meet the Press" program on Sunday that "thankfully, we do not have any reports of any American citizens killed or injured" in Egypt's anti-government demonstrations.

The U.S. State Department was making arrangements to provide transportation to "safe haven locations" in Europe. From those locations, U.S. citizens must make their own travel plans and reimburse the government for their flights out of Egypt, the embassy said in a statement.

According to senior State Department officials, there are 380 government employees at the U.S. Embassy in Cairo, and 760 spouses and children living with them in Egypt.

The television news service Al Arabiya broadcast an unconfirmed report that eight commercial aircraft from Saudi Arabia were on their way to evacuate Saudis from Egypt.

Meanwhile, 500 Jordanians, most of them students, arrived in Amman on Sunday, according to Mohammed Kayed, spokesman for the nation's Foreign Ministry. The ministry is in contact with the Jordanian Embassy in Cairo and was working to help book flights on Royal Jordanian airline for Jordanian citizens.

Royal Jordanian said on its website it operated four scheduled and two extra flights between Amman and Cairo on Sunday "in order to transport Jordanian citizens who wish to come back to the Kingdom, in light of the exceptional conditions prevailing in Eygpt."