Some Egyptians take up arms amid security concerns 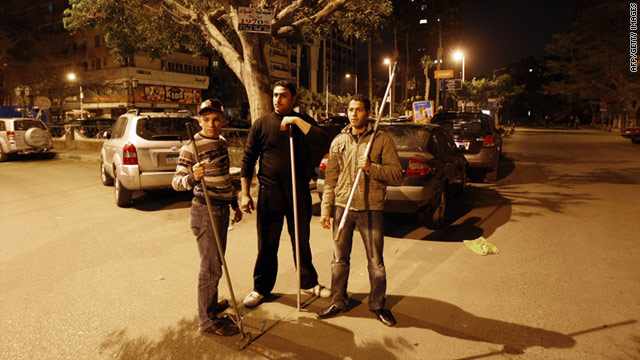 Cairo, Egypt (CNN) -- By day, thousands of protesters marched through the streets of Cairo, chanting against the country's president and calling for his resignation.

By night, some defied a government curfew and took to the streets again -- armed with guns, swords and sticks to fend off looters and protect their homes.

Many streets in the nation's capital were left without security after police stopped patrolling.

Kareem Amer told CNN that houses in his Cairo neighborhood had been ransacked.

"We've been hearing gunshots left and right all night long. ... The men of each household have come down and formed their own group militias holding down security for every building," he said.

Ahmed Rehab of the Council on American Islamic Relations said the atmosphere was tense.

"It seems that every major square and every small street in Cairo was basically taken over by communities ... people are parading the streets, walking around with baseball bats and knives," he said from Cairo. "We didn't get any sleep all night."

State-run Nile TV reported that the military issued a stern warning to the people on Saturday: "Stop the looting, chaos and the things that hurt Egypt. Protect the nation, protect Egypt, protect yourselves."

Still, shops and businesses were looted and abandoned police stations stripped clean of their arsenals.

Cairo's Egyptian Museum stepped up security after vandals ripped the heads off two mummies and tossed relics onto the ground, the country's antiquities chief said Sunday.

On Sunday, state-run Nile TV aired images of men confessing to involvement in looting. A school teacher said he had been involved in looting at a Cairo museum. Three other said they had stolen items from a supermarket in a suburb of the city.

Residents calling in to a program on Nile TV complained about the absence of security. Anchors responded by reassuring callers that the army was protecting the streets.

"Those thugs are setting things on fire. ... They are setting fire in front of the hospital," a caller identifying herself as a doctor in a Cairo neighborhood said.

One anchor replied, "This might be a security check from your colleagues or the workers who are there." Another anchor told her to remain calm.

On the streets overnight, stories swirled about would-be criminals and vigilante justice.