Unrest in North Africa and Middle East may spread to Syria 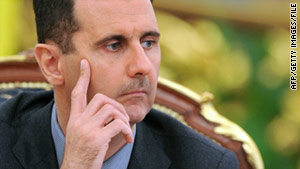 (CNN) -- What began as a popular uprising that toppled the Tunisian government before spreading into Algeria, Jordan, Yemen, Sudan and, of course, Egypt, may now be headed for Syria.

Opposition movements in Syria are calling for mass protests on Saturday against the rule of President Bashar Al-Assad.

The groups are organizing on Facebook, with several pages promoting protests in Damascus, Aleppo and other cities.

It's unclear how many people might join the protests. A few thousand people had expressed their support for the movement on the Facebook pages, some of them undoubtedly from outside the country, the research institute said.

Will unrest spread to other countries?
RELATED TOPICS

On Sunday, Sudan got a taste of the protests. An undetermined number of university students and others demanded the removal of the government in Facebook-organized protests that its leaders said were inspired by the events in Tunisia.

The students protested at a university in Khartoum, chanting "No to high prices, no to corruption" and "Tunisia, Egypt, Sudan together as one."

"The people of Sudan will not remain silent anymore. It is about time we demand our rights and take what's ours in a peaceful demonstration that will not involve any acts of sabotage," according an English-language version of the group's profile on Facebook.

"We will demonstrate against the rising of the prices, the corruption, unemployment and all false practices of the government such as violence against women and lashing them in ways that breaks all laws of religions and humanity and the violation of minorities' rights."

The Sudan Tribune newspaper, citing a statement from police, said 70 people, 40 of them students, were arrested after the protests.

Meanwhile, a Facebook page has surfaced calling for a protest Thursday in Yemen, which has been the site of a few demonstrations already.

The Tunisian protests that sparked the region's unrest sprang up after Mohamed Bouazizi, a 26-year-old college graduate, set himself on fire in protest of police confiscation of the fruit cart he had set up to make money. He later died.

The protests resulted in the collapse of Tunisia's government and inspired similar protests in other countries, including Algeria, Jordan, Sudan and Yemen.

The protests have reached their zenith to date in Egypt, where untold thousands of Egyptians have ignored government curfews and clashed with police over demands that President Hosni Mubarak resign.

A popular Facebook page that helped organize the Cairo protests was dedicated to Bouazizi.