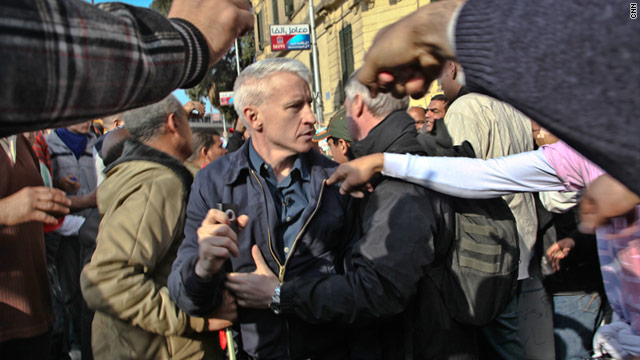 (CNN) -- Sent as reporters to document the turmoil in Egypt, journalists on Wednesday became targets -- beaten, bloodied, harassed and detained by raging men, most all in some way aligned with embattled President Hosni Mubarak.

Numerous news outlets -- including the BBC, ABC News and CNN -- reported members of their staffs had been attacked, most on the streets of Cairo. In several cases, news personnel were accused of being "foreign spies," seized and whisked away, and often assaulted.

"It was pandemonium. There was no control. Suddenly a man would come up to you and punch you in the face," said CNN's Anderson Cooper, describing being attacked by pro-Mubarak demonstrators with two colleagues outside of Tahir Square.

The Dubai-based Al-Arabiya news network was among the worst hit, its office damaged and several of its staff targeted. Among them was correspondent Ahmed Abdullah, who his editor confirmed Wednesday was found bloodied and transported to a hospital after being severely beaten by his captors.

Maurice Sarfatti told the Brussels-based Le Soir newspaper, which he writes for along with publications in Switzerland and France, that he "received a steam of blows to the face" from men claiming he backed leading opposition figure Mohamed ElBaradei.

The Committee to Protect Journalists, a New York-based advocacy organization, claimed that such accounts were all too commonplace around Cairo. In a news release, the group detailed about a dozen incidents, accusing men -- most of them described as pro-Mubarak demonstrators, "plainclothes police," uniformed officers and military -- of perpetrating attacks on reporters toting cameras and notepads.

The group laid the blame for this violence squarely on President Mubarak's administration, accusing it of scheming to suppress and stifle news coverage.

One of those was CNN's Hala Gorani, who got caught Wednesday morning in a stampede of demonstrators, some of whom were riding on camels and horses.

"I got slammed against the gates and was threatened by one of the pro-Mubarak protesters who was ... telling me to 'get out, get out!" Gorani said. "The pro-Mubaraks, whoever they are, whoever sent them, are being threatening toward camera crews, journalists, anybody who looks like they may be onlookers."

Hours later, as he walked past raucous Mubarak backers toward the Tahir Square, the hub of Wednesday's confrontations, Cooper said one man suddenly came out and tried to grab his cameraman's camera, screaming at them and pushing.

That triggered what the CNN host called a "mob," which swarmed around Cooper and his two colleagues. They turned to head back, doing so only after getting hit repeatedly by fists and bottles, with some men trying to rip clothing off a female CNN producer. Egyptian soldiers positioned nearby, he claimed, saw the chaos unfold but did nothing.

"There were certain individuals in that crowd itching for a fight," Cooper said, noting that his cameraman had a bloody eye but otherwise they suffered minimal injuries. "We certainly saw that very up close... It can get nasty very, very quickly."

Other journalists who were attacked fared worse.

Sarfatti, who also goes by the pen-name Serge Dumont, was taken to a military barracks outside Cairo and given a glass of water from the Nile River and told by his captors that they wanted him to drink it and get diarrhea, according a translation of his remarks to Le Soir.

The Egyptian independent daily Al-Sharouk reported that one of its reporters and photographers were injured after "plainclothes police" attacked its headquarters, according to the Committee to Protect Journalist.

The group said that Danish correspondent Steffen Jensen was beaten by Mubarak supporters with clubs, while he was live on Danish TV2. He later said that, after the men asked for his phone and passport, he was being held by soldiers in Tahrir Square.

In a prepared statement, Jean-Francois Juillard, secretary-general of the advocacy group Reporters Without Borders said "the use of violence against media personnel is especially shocking."

"These attacks seem to have been acts of revenge against the international media for relaying the protests calling for President Mubarak's resigning," Juillard said. "We urge the international community to react strongly to these excesses. And we remind the Egyptian government that it has a duty to apply the law and to urgently restore security for everyone, including media personnel."