By Clare Youell, for CNN 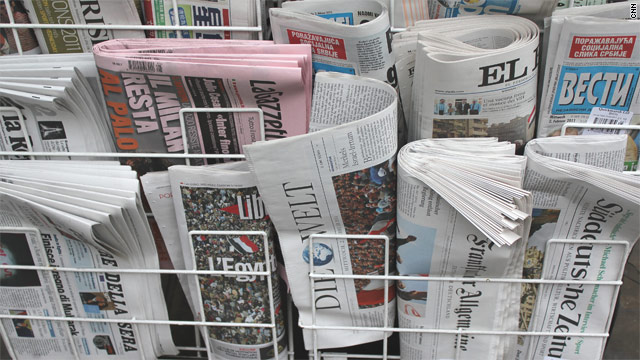 (CNN) -- Egypt's embattled President Hosni Mubarak addressed the nation for a second time Tuesday, declaring his intention not to seek re-election in September amid mass protests calling for his immediate resignation.

"It is not in my nature to give up responsibility. My first responsibility now is to restore the security and stability of the homeland," Mubarak said.

However the world's media has reported that his decision is not enough for most demonstrators, who fear that his legacy will continue through his potential successor -- former intelligence chief, Omar Suleiman.

Mubarak is on his way out, but the regime is still very much in power, says Britain's Guardian newspaper. Egypt's survival plan, it says, centers on Suleiman, also a close confident of Mubarak, who was recently been appointed vice-president.

Day of violence in Egypt

"Right now Suleiman is the most powerful man in Egypt, backed by the military (from which he hails), the security apparatus, and a frightened ruling elite hoping to salvage something from the wreckage," the newspaper wrote.

Meanwhile Robert Fiske, writing in fellow British title, The Independent, voiced the fears of many Egyptians that if Mubarak's chosen successor Suleiman does come to power it could end in a repeat of past mistakes.

"But everyone in Egypt knows that his administration will be another military junta which Egyptians will again be invited to trust to ensure the free and fair elections which Mubarak never gave them," Fiske wrote.

Germany's Spiegel Online calls Mubarak's decision an "act of deception" with the majority of demonstrators vowing to continue their protests in Tahrir Square, demanding that the leader step down immediately .

"Go away, go away," Spiegel quoted one man as saying, while others shouted: "This is not enough."

An editorial in The New York Times meanwhile, suggested that Mubarak was best advised to step aside sooner.

"It is up to the Egyptian people to decide. But as a proud nationalist, Mr. Mubarak can best contribute to Egypt's stability and future by stepping aside and letting an interim government take over until truly free elections can be held," the newspaper said.

France's Le Monde also warns Mubarak's announcement is unlikely to placate the tens of thousands of protesters that have again gathered in Egypt's capital.

It reports Turkish Prime Minister Recep Tayyip Erdogan's comments that the only way Mubarak can answer his people's demands is to leave immediately. But the newspaper also notes the presence of pro-Mubarak demonstrators in Tahrir Square -- a group of about 500 people, carrying banners proclaiming their support for the embattled leader: "President of peace and stability."

The online edition of Israel's Haaretz newspaper reported that one million Egyptians gathered in Tahrir Square at just one day's notice and without the aid of social networking sites or text messages.

"Egyptians created scenes that have never been seen before in any Arab state," the newspaper said.