China, hip-hop and the new Sudan

By Peter Shadbolt for CNN 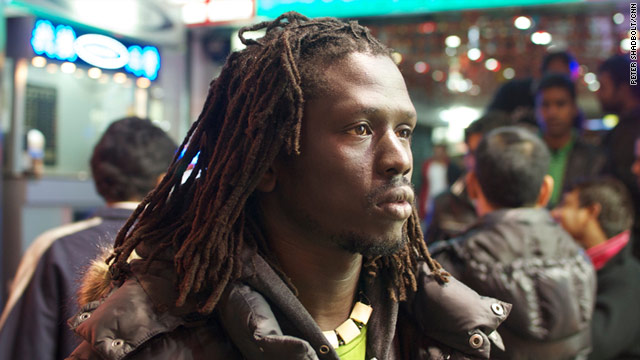 "If it's too comfortable, I can't sleep properly," says Jal, recalling his days on the frontline of Sudan's bitter civil war. "I remember those nights I slept on battlefields with the sound of war all around me ... tat, tat, tat, boom!"

"Of course, then you were never really asleep," he adds

Sitting in an African diner in Hong Kong's Chungking Mansions -- the center of a booming trade in cheap Chinese knock-off mobile phones to Africa -- the Sudanese rapper is now perfectly at home, if a little stunned by the bizarre cultural mix in the restaurant.

"Listen to the waitress," he marvels at a woman taking orders. "She's Chinese and speaks English with a perfect Nigerian accent. It's incredible!"

Jal, in Hong Kong as part of the Make A Difference conference, a Hong Kong-based youth network, says his trip to China comes at a critical juncture for his country.

Southern Sudan's official referendum results, due to be announced this Sunday, are likely to show an overwhelming majority in favor of separating from the predominantly Arab north. Jal, who once supported a unified Sudan, wrestled with his own decision about the vote.

"Unity was not made attractive," he says, explaining why he changed his mind. "Nothing changed after the peace agreement (of 2005)."

"I voted for separation because I want to be a first-class citizen in my own country."

With Southern Sudan on the cusp of nationhood, China is now the focus of its hopes and Hong Kong's fabled Chungking Mansions, a labyrinth-like building in Kowloon and the unofficial African quarter of Hong Kong, the perfect metaphor for the future of both Africa and China.

"The Chinese don't influence our politics," says Jal. "They don't comment on it, and what they want, they pay for -- sometimes double the amount. This tends to make all Africans happy -- from the dictators to the democrats," he adds wryly.

"There isn't a party in Africa that doesn't like them. Even if you're a rebel movement and you say to them you can secure gold, the Chinese will simply say they want to buy it.

"The only foreign policy advice I heard from China was when they said to Sudan, 'Don't go back to war.' That's all they said. They didn't push anything else."

I was given the opportunity to train as a child soldier, and I didn't think twice. I wanted revenge for my family. I wanted to know who killed my mother
--Emmanuel Jal

Sudan has barely known peace throughout the 31-year-old rapper's life and Jal says he's too young to remember peace in Sudan.

Eventually sent to Ethiopia ostensibly to be schooled -- a terrifying journey in which the ferry in which he was traveling capsized killing hundreds of other similarly displaced children -- Jal was soon recruited by the Sudan People's Liberation Army (SPLA) who used the schools as a front for their training camps.

"When I made it to Ethiopia, I was given the opportunity to train as a child soldier, and I didn't think twice," he says. "I wanted revenge for my family. I wanted to know who killed my mother."

Fighting in four major battles between the ages of 7 and 12, Jal's only true companion was an AK-47.

"You tended not to make friends -- it just messed with your head. And even now I don't really make deep friendships," he says, plowing diffidently through a plate of goat and okra in Chungking Mansions.

The hardship of life in the SPLA still carries its scars, both physically and emotionally, although Jal retains a residual respect for a rebel movement that operated on a meager $4 million a year.

"We were trained properly in the SPLA. We were lucky that we were not given drugs or alcohol -- in fact, it was banned," Jal says. "We were disciplined properly to protect the image of the movement."

Nevertheless, the demands of combat took a heavy toll. The long marches, the heavy loads of ammunition and the sleeplessness still affect him today in the form of migraines and flashbacks.

"The most difficult thing was that you didn't know when you were going to die," he says. "For me, my biggest fear was being injured. I didn't want to get shot in the eye or the leg or any other place that would leave me disabled.

"The thought I had was if I'm going to get shot, just finish me off completely. Just please God, let me get out of this!"

He escaped the rebel movement at the age of 12, deserting with some 400 other soldiers in a three-month ordeal in which minefields, government troops, wild animals and eventually thirst and starvation claimed all but a dozen survivors who staggered into the town of Waat.

It was there that he was picked up by British aid worker Emma McCune who smuggled the child soldier to Kenya where he was schooled and where his music career began.

Now with several international hits under his belt -- including the hit single "Gua" which means peace in Southern Sudan's Nuer language -- Jal says that music is his main weapon and his fame the best way of bringing peace to the new Sudan.

"One thing that has been done by the international community is that they have created noise and created awareness and they've put Sudan in the spotlight and that has reduced the tension.

"The pressure from outside really helped," he says referring to the high-profile campaigning of actors like George Clooney. "Because no bad guys want to be seen doing bad things -- they want to do it in the dark."

Whether the referendum will bring lasting peace to Southern Sudan still remains to be seen and Jal says that while he voted for separation, it's too early to start celebrating.

The only way forward, he says, is through education. His Gua Africa charity -- a foundation which he established three years ago to help Sudanese communities overcome the effects of war and poverty -- has just completed its first school project; a labor of love in which the former child soldier vowed to eat just one meal a day until the project was completed.

"I don't know anywhere where the people are hungrier for education than South Sudan," he says.