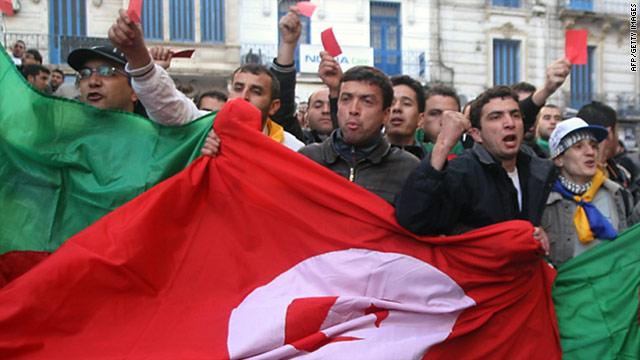 (CNN) -- Algerian President Abdelaziz Bouteflika said Thursday he will soon end a two-decades-long state of emergency in that county, according to a news report.

Bouteflika said he would lift the ban in the "very close future." The announcement was reported by the Algerian Press Service.

Experts say the announcement is a clear attempt by the Algerian leader to head off the kind of social unrest that toppled the autocratic Tunisian government and now threatens the regime of Egyptian President Hosni Mubarak.

Bouteflika's announcement comes about two weeks after government opponents marched in the North African nation to demand that the ban be lifted. The demonstrators also called for the release of detainees and the restoration of individual and collective freedoms.

"I think you have to consider Algeria just as vulnerable to the ripple effect running through Tunisia, Egypt, Jordan or Yemen," said Andrew J. Pierre, a Jennings Randolph senior fellow at the United States Institute of Peace. "You have a high rate of unemployment. You've got a lot of societal unhappiness, so you have the potential for a social eruption there as well."

Saad Djebbar, a London-based Algerian lawyer and political analyst, said the regime has clearly been affected by the democratic protest movements across the region.

"My take is that the regime may be preparing (for public protests)," Djebbar said from London. "They want to produce some sort of trick that would show that reform is under way, like what Mubarak is doing in Egypt, who appears to be using all of the tricks in the book to avoid being removed."

A 2001 law indefinitely banned all demonstrations in the capital, Algiers, according to the monitoring group Human Rights Watch. The measure said the government could ban any event that is "likely to disturb public order and tranquility."

Public protests have swept across North Africa and the Middle East in the last few weeks, prompting major changes in several countries, most notably in Tunisia, where President Zine El Abidine Ben Ali left power after 23 years, and in Egypt, where Mubarak has announced, amid massive unrest, that he will not seek re-election.

Protests also have unfolded in Jordan and Yemen.

The king of Jordan recently fired his government and named a new prime minister with orders to implement reforms. Yemeni President Ali Abdullah Saleh said after protests Wednesday that he will not seek re-election.

"Why didn't he announce that six weeks ago as opposed to yesterday," Pierre said. "The answer is obvious."

Pierre said that whether any of these protest movements succeed, "there is a wholesale change going on."

"These regimes are going to be more and more questioned by their populations in this Facebook/Twitter age," Pierre said. "We are entering a new era."

Djebbar isn't so sure existing regimes, if they remain in power, would adapt, nor would they likely loosen their autocratic control.

"If the Mubarak model of reforming dictatorships succeeds, it would be very encouraging to other, what I like to call '21st century mafia states' in the region," said Djebbar. "That model would be emulated in Algeria and elsewhere. It would be goodbye to the democratization process in this part of the world for many years to come."

However, he added, the opposite is also true if the pro-democracy movement in Egypt succeeds.

"Dictators are like dinosaurs," Djebbar said. "They have no evolutionary process. They go extinct."