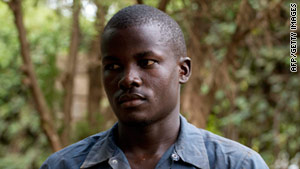 In a news conference at which suspect Enock Nsubuga was presented to the media, authorities said he admitted using a hammer to bludgeon Kato to death.

Nsubuga was taken into custody Wednesday afternoon, though police said they'd been tracking him for several days.

The head of Uganda's national police, Kale Kayihura, said Thursday in the capital, Kampala, that Nsubuga was an ex-convict who had been working in Kato's garden at the time of the activist's death.

After being detained, Nsubuga admitted to killing Kato and explained why he did so, according to Kayihura.

According to the suspect, Kato, 46, promised to pay Nsubuga money for having sex with him. But Kato never followed through. An angered Nsubuga told police that he then took a hammer from the bathroom and fatally beat Kato.

Kayihura said he believes the attack was not a hate crime, as has been widely reported, but rather stemmed primarily from Nsubuga's desire to get money from Kato. The police chief denounced elements within the public, as well as the media, for reports that he claimed had fueled aggression against Uganda's homosexual community.

He specifically mentioned a report from Rolling Stone -- a Ugandan tabloid that is not affiliated with the iconic U.S. music magazine by the same name -- that published a list late last year of the African nation's "top 100 homosexuals" with their photos, addresses and a banner with the words "Hang Them." Kato's name and picture were on the list.

According to Kato's lawyer, the activist had feared for his safety prior to his death, even alerting police about his concerns.

Late last week, human rights activist Naomi Ruzindana said she did not believe the killing was a robbery gone wrong. "I don't think it's a coincidence that it happened ... he had got threats over and again," she said.

Nsubuga had a long criminal history, including being jailed recently for stealing a cell phone, police said.

According to neighbors, Nsubuga was last seen leaving the activist's house on Tuesday of last week. Kato was found dead the following day.

Chaos ensued at his funeral last Friday, after a pastor rebuked homosexuals at the service in Mukono, a small hillside village outside the capital. Mourners took away the man's microphone and police whisked him away from the angry crowds. A sympathetic Anglican bishop stepped in to finish the ceremony.

Ugandan lawmakers shelved a controversial "anti-gay" proposal introduced in 2009 that would impose tough penalties against homosexuality, including life imprisonment and the death penalty.

Even with Nsubuga's arrest and alleged confession, as well as the earlier detainment of Kato's driver, the police chief said Thursday that the murder investigation is continuing.