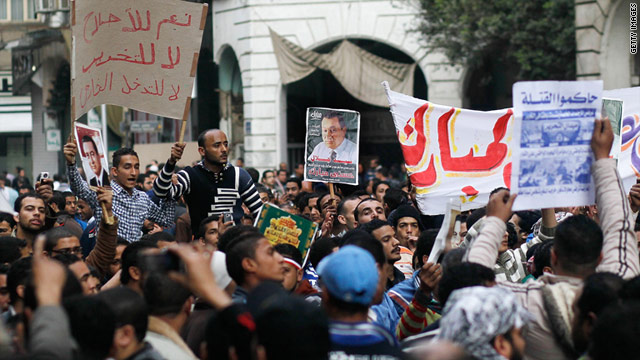 Don't miss an exclusive interview with Mohamed ElBaradei on Friday night on "Parker Spitzer" at 8 ET. And later, Anderson Cooper reports live from Cairo with the latest on the violent clashes between protesters and Mubarak supporters in Egypt. Watch "AC360º" at 10 ET on CNN.

Cairo, Egypt (CNN) -- What a difference a few city blocks can make. Crowds of thousands upon thousands of Egyptians demonstrated peacefully Friday, filling most of Cairo's sprawling and once besieged Tahrir Square. They played music on loud speakers, danced and chanted "down with the dictator" in a rally dubbed "Day of Departure."

But down the side streets leading east from Tahrir Square, just a few hundred meters away, fierce clashes raged between gangs of pro- and anti-regime youths.

After hours of skirmishes, the rebels had advanced east, erecting barricades and checkpoints around the imposing 19th century stone buildings that line the roundabout in Talaat Harb Square. By 7 p.m., the opposition activists had also seized streets running several blocks deeper into the city from Talaat Harb.

A 20-minute walk down the streets of newly captured opposition territory showed streets littered with rocks and paving stones, which have been the primary weapons used during three days of urban fighting.

Young men raced back from the clash points, carrying wounded comrades who howled in pain.

They carried one young man dressed in a preppy button-down shirt and sweater into a makeshift first aid station in a storefront at one of the entrances to Tahrir Square.

"A group of 50 of them surrounded me and beat me," the man yelled. He bit down furiously on a notebook and sweated profusely as medics took off his shoe, revealing what appeared to be a badly broken foot. Moments later, bystanders applauded when the man waved a victory sign as he was carried away.

An Egyptian army soldier stood in the corner of the room, keeping a close eye on a bruised and bloodied shoeless man who sat in a corner. He was a prisoner who appeared to have been severely beaten after being captured by demonstrators. When the soldier motioned for the man to follow him out of the first aid station, the captive cried and begged not to be led out into Tahrir Square.

Throughout the day, several captives have been similarly escorted by Egyptian troops deployed in Tahrir Square to a military-controlled alley behind Cairo's Egyptian Museum. The soldiers protected these prisoners from angry protesters, who cursed and tried to beat them as they were led through the square.

At one point, activists sounded the alarm, calling for 10 volunteers to rush to the front lines past Talaat Harb Square. Young men began beating metal poles against metal barricades and whistling as teenagers wearing helmets made from cardboard boxes and carrying stones raced toward the latest street battle.