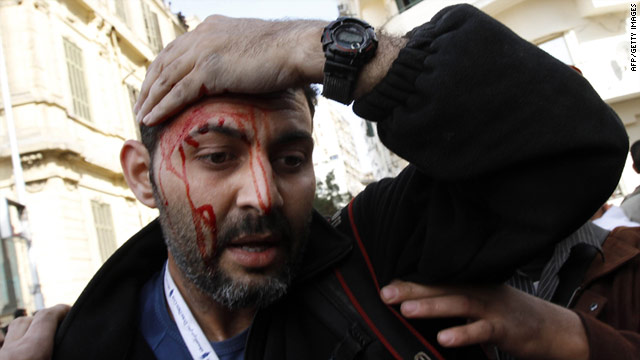 Cairo, Egypt (CNN) -- Amid widespread criticism of Egypt for attacks on journalists, the country's prime minister on Saturday said there have been "no instructions to hinder the coverage of the media in the Tahrir area."

"I made clear that they have full freedom to do anything they want," Ahmed Shafiq said.

"We welcome the news that these activists have been freed, but we are outraged that they were detained in the first place and by the manner in which they have been treated," said Malcolm Smart, Amnesty International's Middle East and North Africa director.

He said the whereabouts of several other activists detained in separate incidents are unknown.

"The Egyptian authorities must now carry out an urgent independent investigation into why human rights activists monitoring protests in Cairo were targeted in this way, and who gave the orders for it," Smart said.

In recent days, some have accused President Hosni Mubarak of orchestrating the assaults to suppress international coverage of bloodshed by pro-government operatives against peaceful protesters in Cairo's Tahrir Square.

A trip outside of Cairo's Tahrir square

The Committee to Protect Journalists, an independent, nonprofit group promoting press freedoms worldwide, has excoriated Mubarak for "an unprecedented and systematic attack" on international reporters.

"This is a dark day for Egypt and a dark day for journalism," said the committee's executive director, Joel Simon. "With this turn of events, Egypt is seeking to create an information vacuum that puts it in the company of the world's worst oppressors, countries such as Burma, Iran and Cuba."

"We hold President Mubarak personally responsible for this unprecedented action," he said, "and call on the Egyptian government to reverse course immediately."

The Committee to Protect Journalists said Friday it has recorded at least 101 direct attacks on journalists and news facilities this week. The anti-press activities include assaults, detentions and threats, the committee said.

Friday's attacks weren't as severe as Thursday's peak offenses, but the hostilities against a free press remain at "an alarming level that must be halted," the committee said.

Plainclothes and uniformed agents reportedly went so far as to even enter journalists' hotels and confiscate equipment, the committee said.

A journalist shot a week ago while covering a demonstration died Friday, a state newspaper reported, according to the committee.

It was the first reported journalist death during the weeklong uprising, it said.

Ahmad Mohamed Mahmoud of the newspaper Al-Ta'awun, published by the state-owned Al-Ahram Foundation, died from a sniper's bullets fired while he was filming confrontations between demonstrators and security forces January 28 in central Cairo's Qasr al-Aini area, adjacent to Tahrir Square, Al-Jazeera and the semi-official Al-Ahram reported Friday, according to the committee.

The Mubarak regime hasn't discriminated in which journalists are being attacked: Egyptians and other Arabs, Russians, Americans, Europeans and South Americans all have been targeted, the committee said.

"I actually blame certain friendly nations who have television channels, they are not friendly at all, who have intensified the youth against the nation and the state," he said. "They have filled in the minds of the youth with wrongdoings, with allegations, and this is unacceptable."

Pro-government journalists and officials have been engaging in a campaign the past few days accusing foreign journalists of being spies or, in particular, "Israeli spies," the Committee to Protect Journalists said. In one instance, a woman whose face was obscured "confessed" to having been trained by "Americans and Israelis" in Qatar, where Al-Jazeera is based, the committee said.

NPR journalist Lourdes Garcia-Navarro and her Egyptian-American colleague, Ashraf Khalil, provided a typical account Thursday of how routine street reporting quickly turned in a thuggish assault on them.

While interviewing a taxi driver about food, money and security in a middle-class neighborhood across the river and a good distance from the often-violent Tahrir Square, at least a dozen men suddenly surrounded them, Garcia-Navarro said on the NPR website.

They asked for IDs and whether they were Israeli spies or worked for Al-Jazeera, an Arabic-language media outlet whose extensive coverage has angered the Mubarak regime.

The men surrounded Garcia-Navarro in her car and repeatedly punched Khalil in the face. After 10 minutes, the army showed up, calmed the mob and protected the journalists.

"What happened today -- I've lived here on and off since 1997 -- I did not think they had it in them, this kind of violent paranoia and xenophobia," journalist Khalil said. "I've never seen Egypt like this."

The attacks against reporters targeted some of the most prominent news organizations in the Western and Arab worlds alike.

The Al-Jazeera network said Friday that a "gang of thugs" stormed its Cairo office and burned the facility and the equipment there. The network confirmed Saturday that its Cairo bureau chief has been detained since the night before.

Al-Jazeera said that over the past week "its bureau was forcibly closed, all its journalists had press credentials revoked, and nine journalists were detained at various stages." The network said it "faced unprecedented levels of interference in its broadcast signal as well as persistent and repeated attempts to bring down its websites."

Like other networks, Al-Jazeera said it won't let such obstacles stop it from gathering news.

"We are grateful for the support we have received from across the world for our coverage in Egypt and can assure everyone that we will continue our work undeterred," a network spokesman said.

Meanwhile, the French Foreign Ministry said it has had no word on the whereabouts of three French journalists and a French researcher in Egypt. The journalists work for Le Figaro newspaper and Magneto Presse, and the researcher is employed by Amnesty International, it said.

A prominent blogger, Wael Abbas, said a group of people who said they thought he was a foreigner detained him Friday afternoon. They turned him over to the military, which released him, he said.

And the Egyptian military secured 18 journalists who were captured by thugs and took them to a "safe place," Egyptian state media reported Friday.

It was unclear which news organizations the journalists worked for or where they had been taken. CNN could not independently confirm the report.

Journalists attempting to cover unrest in Egypt also reported being beaten, arrested and harassed by security forces and police on Thursday, leading to sharply limited television coverage of the protests.

Along with Al-Jazeera, other news outlets -- including the BBC, Al-Arabiya, ABC News, the Washington Post, Fox News, and CNN -- said members of their staffs had been attacked or otherwise targeted.

U.S. State Department officials told CNN earlier that they had information that Egypt's Interior Ministry was behind the journalist detentions, citing reports from the U.S. Embassy in Egypt.

The Islamist group Muslim Brotherhood reported that its website office was stormed Friday by security forces, who arrested "the journalists, the technicians and the administrators" in the office. A "gang of thugs" accompanied the forces, the Muslim Brotherhood said.

Some of those individuals were later seen being taken near the Interior Ministry headquarters, the website said.