China: West has no right to punish Zimbabwe 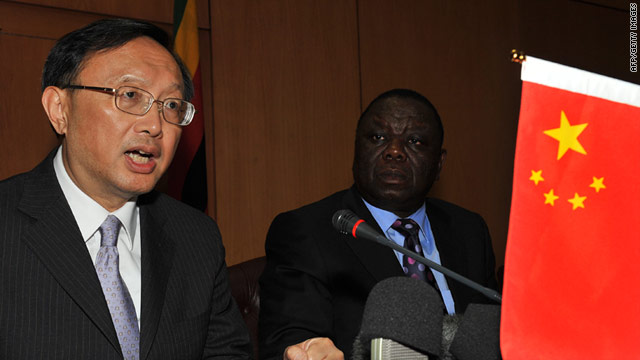 (CNN) -- China's foreign minister pushed Friday for the lifting of sanctions against Zimbabwe, saying no country has a right to dictate the internal affairs of another nation, state-run media reported.

Starting in 2002, the European Union and the United States imposed targeted sanctions on Zimbabwe President Robert Mugabe and some senior party members amid rampant reports of stifling his political opposition, human rights violations and his controversial land reform policy that has targeted white commercial farmers.

Mugabe blames the sanctions for his country's woes, which late last year included an unemployment rate of more than 90% and an inflation rate of 231,000,000%.

Speaking Friday during a two-day visit to Harare, Chinese Foreign Minister Yang Jiechi said that "China believes that Africans have the right to choose their own way of development, as they are masters of the African continent. All others are just guests."

"We think that (lifting sanctions) is the voice of the Zimbabwean people, and that is also the view of all the parties concerned here in Zimbabwe," Yang said, according to the Chinese state-run Xinhua news agency.

As part of his trip, China extended an additional 50 million yuan ($7.5 million) in aid to the economically ravaged African nation, Xinhua reported. In addition, Yang and Zimbabwe Foreign Minister Simbarashe Mumbengegwi signed an agreement on behalf of the two countries.

According to Xinhua, Mugabe on Friday said sanctions flew in the face of a 1979 agreement with Great Britain that land would be redistributed to compensate farmers.

"The Western countries have imposed sanctions on us for taking our land, although we had discussed this in 1979," he said. "That is what started the problem."

Last December, Mugabe threatened to seize all Western-owned investments in the country unless their governments remove targeted sanctions imposed on him and his senior ZANU-PF party members.

The 86-year-old former guerrilla leader said at the time that "the time has come for ... revenge" and suggested that Zimbabwe's Indigenization and Economic Empowerment Act -- which gives foreign companies five years to submit plans for transferring 51% of their investments to black Zimbabweans -- did not go far enough.

Mugabe has held power since Zimbabwe became independent in 1980. A 2008 election resulted in a runoff between Mugabe and Tsvangirai. Movement for Democratic Change, charging fraud in the election, eventually pulled out, and Mugabe was declared the winner.

In 2009, with ZANU-PF no longer a majority in the parliament, Mugabe formed a coalition government with Tsvangirai, who was named prime minister.

Mugabe said last December that he was tired of working with the opposition party, which he said "lacked ideology and policies." He termed the unity government a "creature."

At the time, he warned Western diplomats not to interfere in Zimbabwe's elections, which he said would be held next year. He said the West had contributed to his party's defeat in 2008.

Despite isolation from the West, Mugabe's supporters include his Iranian counterpart Mahmoud Ahmadinejad.