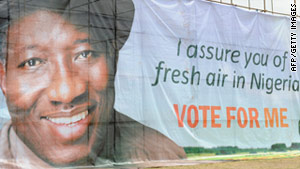 Nigerian President Goodluck Jonathan has called for an investigation into a stampede at a rally backing his re-election.
STORY HIGHLIGHTS
RELATED TOPICS

(CNN) -- Eleven people were killed and 29 injured during a stampede at an election rally for Nigerian President Goodluck Jonathan, officials said.

The stampede happened during a rally at Port Harcourt stadium in the country's southern delta, Rivers state spokesman Rita Inoma-Abbey told CNN. The area is the president's home turf and a main area of support.

A presidential spokesman said that Jonathan has called for a full-scale investigation into the cause of the stampede.

The president "has received with shock and sadness, news of the unfortunate loss of lives" at the stadium, Ima Niboro said.

"I am sad, and heavily weighed down by this incident. It is sad, unfortunate and regrettable. I mourn with those who mourn tonight. May God grant us all the fortitude to bear this irreparable loss," Jonathan said.

The stampede follows what has been an imperfect start to Jonathan's campaign. At his first campaign stop in Nassarawa state, youths defaced his posters, burned tires, and two people were killed in the confusion. At another stop in Kano, supporters walked out before his speech, and in Ogun state he was criticized for calling opposition candidates "rascals."