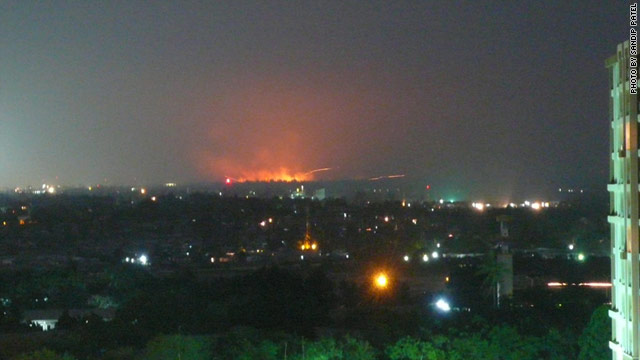 Shock waves could be felt in neighborhoods more than six miles (10 kilometers) away from the airport in Dar es Salaam.
STORY HIGHLIGHTS
RELATED TOPICS

(CNN) -- Witnesses who heard explosions in Tanzania's largest city Wednesday night said they first thought the blasts were thunderclaps, until they saw the night sky glowing red and orange.

Sandip Patel grabbed his camera and ran to the top of his apartment building. He snapped away as a series of explosions shook neighborhoods around Dar es Salaam's Julius Nyerere International Airport.

Eyewitnesses from the Kimara district, north of the airport, told CNN they could see fireballs from their homes in the hills. "Particles from the explosion hit where we live. We took cover by laying down," one observer recounted.

"It looked like a sunrise in the dark," another eyewitness said. "Windows were rattling, you could feel the vibrations ... there were continuous explosions."

Blasts were first reported just after 9 p.m. (1 p.m. ET) and continued intermittently for about an hour and a half. Shock waves could be felt in neighborhoods more than six miles (10 kilometers) away from the airport, according to eyewitnesses.

Patel told CNN that his first impression, upon hearing the noise and feeling his apartment tremble, was that storms were coming. He and his wife studied the sky for proof of bad weather -- or detonations -- and it didn't take long to notice a "red-red, orange-orange thing in the sky." Wanting a better view, he and his wife ran to the 11th floor of their apartment building and Patel began taking pictures.

His photos show the night sky over Dar es Salaam lit with an eerie orange fireball. Munitions streak away from the center of the red-orange globe at crazy, looping angles. Patel told CNN that ammunition was "going up like firecrackers. A number of them went off every second ... over a long time. Every second or two, you'd hear some sort of explosion."

In a travel summary issued late Wednesday, Britain's High Commission said an army munitions bunker exploded in the Mbagala district near the international airport. Police have set up an evacuation center at Saba Saba grounds on Kilwa road, according to the summary, and are asking residents with in a 10-kilometer radius to evacuate.

Multiple witnesses have confirmed hearing similar announcements on the radio, warning residents of Dar es Salaam to avoid the area and asking residents to evacuate.

Patel spoke about the ammunition depository near the airport with CNN. He said residents have long been concerned about the facility, and that a deadly accident happened at the same storehouse two years ago. Patel said he thought chaos and panic caused a significant number of casualties in that incident, and expressed fear that something similar could happen again.

The U.K. travel summary said two children died in September 2009 as a result of the clearance of unexploded ordnance at the Mbagala ammunition storage depot. The summary warned anyone visiting the area not to pick up metal objects and to report any strange items they see to local authorities.

An airport employee confirmed for CNN that explosions were heard near the airport, but would not comment on time or location.