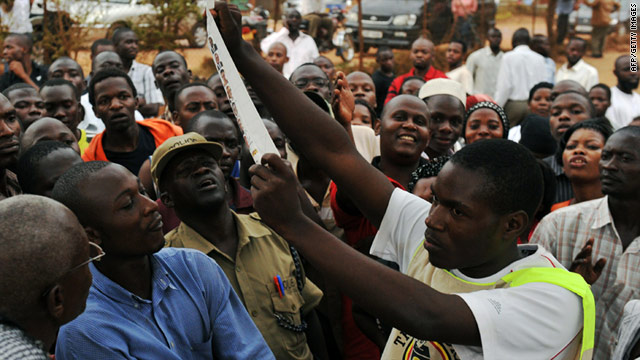 A poll worker shows a vote to people wanting to see after the vote counting started in Kampala, on February 18, 2011
STORY HIGHLIGHTS

President Yoweri Museveni, who has led Uganda since a rebel group he was aligned with seized power in 1986, won 71% with a fifth of the votes counted. Challenger Kizza Besigye had 22%.

"There have been widespread malpractices in the electoral process," Besigye said.

He said voters had been bribed and that "huge amounts of money" landed in the hands of polling agents and candidates to pay off electoral officials.

"Local council officials and security agents have been threatening people with war if Museveni does not win this election, and the purpose can only have been to intimidate and threaten the Ugandan people so that they were scared to express their desire for change," Besigye, who heads the Inter-Party Cooperation.

We cannot trust an electoral commission that was appointed by the ruling party. We have to have our own check mechanism.
--Spokeswoman, Inter-Party Cooperation
RELATED TOPICS

The government has dismissed the accusations and said the opposition is trying to undermine the election.

A new term would give Museveni five more years in power. Final results will be released Sunday.

Ugandans lined up early to cast their ballots amid heavy security in the capital and other areas. Increased security forces in anti-riot gear patrolled the streets of Kampala a day after the elections.

His party said it had anticipated rigging this year, and it plans to conduct its own tally.

"We cannot trust an electoral commission that was appointed by the ruling party. We have to have our own check mechanism," said Margaret Wokuri, a spokeswoman for Bisyegi's party.

Museveni was once hailed for stabilizing Uganda and helping combat the AIDS epidemic, but has faced mounting criticism over corruption and lack of political transition in the country.

About 14 million people registered to vote in the presidential and parliamentary ballot.

There are a total of eight presidential candidates, Wokuri said.