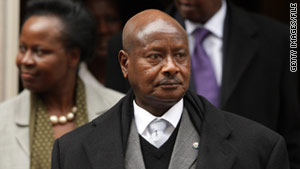 Kampala, Uganda (CNN) -- Uganda's electoral commission on Sunday declared that President Yoweri Museveni had won another term, an election that an opposition leader blasted as a "sham" and an international observer claimed was marred by bribes and various "failures."

Museveni captured 68% of the vote, easily topping his nearest foe Kizza Besigye, according to official results released on Sunday. He has been president since 1986, when a rebel group he led seized power.

Yet the opposition signalled Sunday that it had no plans to accept the outcome. Besigye, who had once been Museveni's doctor, told reporters that he and his supporters "categorically reject" the result as well as the continued rule of Museveni and "any person or persons he may (decide) to appoint."

He and other leaders in recent days have claimed the ruling party gave out "huge amounts of money" to polling agents and candidates to pay off electoral officials, among other accusations.

"An election under such an environment cannot reflect the will of the people, and clearly the institutions of state charged with the management of the elections have failed our country," said Besigye, who heads the Inter-Party Cooperation.

The government has dismissed the claims and said the opposition is trying to undermine the election.

Edward Sciculuna, the European Union's chief observer of the election, told reporters about problems that raised questions about the validity of the final results.

Among other issues, Sciculuna said that EU observers widely reported "the distribution of money and gifts by candidates, especially from (Museveni's) ruling party" -- a practice that he called "inconsistent with democratic principles."

The EU official added, "The electoral process was marred by avoidable -- and we underline the word avoidable -- administrative and logistical failures."

Museveni was once hailed for stabilizing Uganda and helping combat the AIDS epidemic. But he has faced mounting criticism over corruption and lack of political transition in the central African country.

The outcome of the February 18 vote -- for which 14 million people registered to participate -- would assure Musveni another five-year term.

The electoral commission's decision Sunday follows another much-disputed 2006 victory over Besigye, who also failed in his 2001 bid to unseat his former patient.

Margaret Wokuri, a spokeswoman for Besigye's Inter-Party Cooperation, said the opposition had expected vote-rigging this year. Earlier, that party announced plans to conduct its own vote tally, though the current status of such a count remained in question.

Members of Museveni's National Resistance Movement took to the streets of Kampala this weekend, singing and marching in a parade celebrating their candidate's apparent re-election.

The opposition's next step remained unclear. Museveni has already vowed to quash any Tunisia or Egypt-like uprisings aimed at toppling his government.

For now, Beseigye said simply that his party would not be compliant or sit still.