Countries scramble to get citizens out of Libya 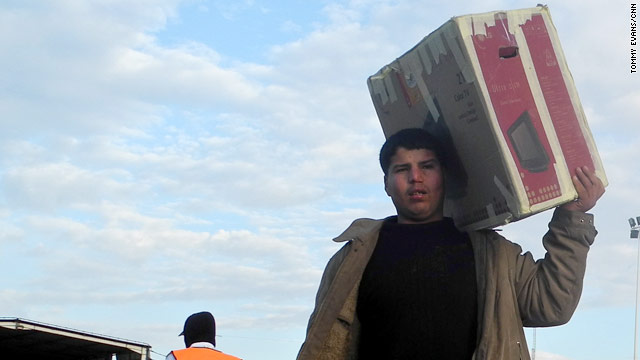 (CNN) -- Governments around the world are making a run to get their citizens out of volatile Libya. Here is a country-by-country breakdown:

The president's office is sending an EgyptAir plane to Tripoli Thursday to evacuate 260 workers and their families. South Korean officials are considering chartering more planes, as well as moving people by land and sea routes. There are nearly 1,400 South Koreans in Libya, working at almost 300 building sites.

Egyptian authorities have asked EgyptAir to operate evacuation flights of Egyptian nationals from Tripoli, according to EgyNews, the official state-run website. Two military planes have also been sent, the assistant foreign minister for expatriate told Egyptian TV, and there are ongoing efforts to send ferries to ports in Tripoli and Benghazi.

The first flight carrying Nigerian nationals out of Libya will leave Thursday, according to a spokesman for Nigeria's National Emergency Management Agency. Officials aren't sure how many people will need flights but say any necessary flights will be organized.

Israeli Prime Minister Benjamin Netanyahu agreed to allow 300 Palestinians to enter the Palestinian territories from Libya on humanitarian grounds, according to a statement from his office. The request was made by Palestinian Authority President Mahmoud Abbas.

The boats will carry food and medical supplies for Libyans as demanded by the Turkish prime minister, the ministry said. The ministry added that in addition to the daily scheduled flights by Turkish Airlines to Tripoli, seven more planes are on standby in case it is permitted to fly to Benghazi airport or make additional flights to Tripoli. Since Saturday, Turkey has evacuated 2,100 citizens from Libya, the ministry said.

The Foreign & Commonwealth Office has made a chartered plane available for British nationals who wish to leave Tripoli. The FCO is also working to assist British citizens elsewhere in Libya and plans to review longstanding arrangements for aircraft evacuations from Libya.

A consular team from the British Embassy is already on the ground at Tripoli's airport and is in place to assist British nationals. That team will be reinforced by two specialist consular teams, one of which has already arrived in Libya. The other is on the charter flight from Gatwick, the Foreign Office said.

The British Embassy is in contact with about 300 British nationals in and around Tripoli and was giving them instructions on how to catch the charter flights, the office explained.

Britain said its citizens who don't have "a pressing need to remain in the country should leave by commercial means if it is safe to do so." The government was advising Britons who want to leave Libya but can't buy tickets online "to travel to the airport carrying sufficient cash to buy tickets."

British Airways and BMI canceled its flights to and from Tripoli for Wednesday, and was reviewing flights scheduled to depart later in the week.

The foreign ministry in France said that it had sent three planes to Libya to help repatriate French citizens and that its embassy in Tripoli was helping to get citizens to the airport.

Syria said it will send two flights Wednesday and had sent two others Tuesday to run between Damascus and Tripoli. The Syrian Arab News Agency said the country is ready to launch an "unlimited number of flights if necessary." It added that Syria may also send a ship to the eastern Libyan city of Benghazi to help evacuate Syrians.

The government in the Netherlands said a military plane and a Dutch frigate would help evacuate its nationals in Libya.

A ferry chartered by the U.S. to evacuate citizens from Libya will stay in port in Tripoli overnight because of bad weather, diplomatic sources told CNN. Citizens are safe on board and the ship is expected to leave at some point Thursday, sources said.

The ship can hold 575 people, according to State Department spokesman P.J. Crowley. Those onboard include U.S. citizens, embassy staff, and some third-country nationals. Once the ferry departs, the State Department will say how many are onboard.

The U.S. State Department was not able to land charter planes in Tripoli to fly out U.S. citizens because Libyan authorities did not give permission for those aircraft to land, a senior administration official said Tuesday. So, the State Department was chartering a ferry to take travelers from central Tripoli's As-shahab port to Valletta, Malta, on Wednesday.

Earlier, the department advised that travelers should have all proper travel documents and may bring one suitcase and one carry-on item. Pets are allowed, but must meet stringent EU requirements once they reach Malta. The passengers will be required to reimburse the U.S. government later. U.S. military forces have not been requested to assist in the evacuation of American citizens from Libya, Pentagon spokesman Col. Dave Lapan said.

A source with Occidental Petroleum, once of the biggest operators in Libya, told CNN that the company chartered a plane from Tripoli to Abu Dhabi Tuesday, bringing some 35 employees out of the company.

Oil companies, such as Total, BP and OMV, said they would or planned to evacuate people some staff and families.

The U.N. refugee agency is urging neighboring countries not to turn away asylum-seekers and refugees should they flee the upheaval. A spokeswoman for the U.N. High Commissioner for Refugees said reports she has received have been worrying. "A journalist has passed information to us from Somalis in Tripoli who say they are being hunted on suspicion of being mercenaries. He says they feel trapped and are frightened to go out, even though there is little or no food at home," Melissa Fleming said.

Meanwhile, about 12,000 people have crossed into Egypt from Libya, officials say, in an effort to flee the violence engulfing the North Africa nation. "There is no security over there," said Esat Abubakr, an Egyptian living in Benghazi said Tuesday after he arrived in Sollum, Egypt. He described widespread violence and a climate of fear with no security. He said people drove to the border and then walked across. "Every Egyptian I know is trying to come back to Egypt," he said.