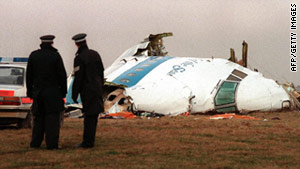 (CNN) -- The Swedish tabloid Expressen reported Wednesday that Libya's former justice minister has accused Moammar Gadhafi of ordering the 1988 bombing of a jet over Lockerbie, Scotland, that killed 270 people.

"I have evidence that Gadhafi ordered the Lockerbie," Mustafa Abdul Jalil is reported to have told the newspaper, though the article cited no specifics.

The tabloid said the interview lasted about 40 minutes and was carried out Wednesday by Expressen reporter Kassem Hamade in Libya "in the local parliament in a major city."

In the December 21, 1988, incident, Pan Am Flight 103 exploded in the air carrying 259 people. Everyone aboard and 11 people on the ground were killed.

An investigation concluded that a bomb had been placed on the plane.

Abdelbeset Ali Mohmed al Megrahi, a Libyan, was convicted of the crime and sentenced to life in a Scottish prison. But he was released in 2009 on compassionate grounds after being diagnosed the previous year with what was characterized as terminal cancer. He is now living in Libya.

According to Mustafa Abdul Jalil, who reportedly has quit his job recently to join the protesters, Gadhafi did everything he could to secure Megrahi's release to hide his own involvement.