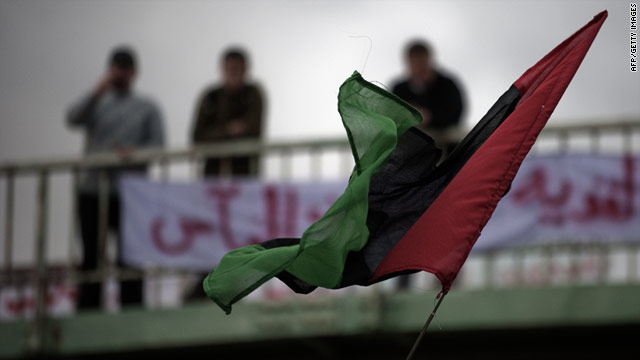 Libya's old national flag flutters in front of a bridge during an anti-Gadhafi protest in the eastern Libyan town of Derna.
STORY HIGHLIGHTS
RELATED TOPICS

(CNN) -- Al Qaeda's North African wing has said "it will do whatever we can to help" the uprising in Libya, according to a statement the militant group posted on jihadist websites

The statement by Al Qaeda in the Islamic Maghreb was posted Thursday, said SITE, a terrorist-tracking organization based outside Washington.

In the statement, the group said Libyan leader Moammar Gadhafi's decision to hire mercenaries and use planes to fire on protesters invalidates claims that the group is killing innocent civilians.

Al Qaeda in the Islamic Maghreb started as the Salafist Group for Preaching and Combat with aspirations to overthrow the Algerian government.

Around 2004, it joined forces with al Qaeda and extended its reach across North and West Africa.

To stop the militant group's growing influence in Libya, the country has in the past denounced al Qaeda and formed an alliance with the Libyan Islamic Fighting Group, which once was aligned with al Qaeda before it formally ended a nearly two-decades armed struggle against Gadhafi's regime.

In 2006, al Qaeda documents found by U.S. forces in Iraq showed that per capita, Libya surpassed other Arab nations in the number of citizens joining al Qaeda. The regime's fear was that the terror group would bring its fight back to Libya.