Libya: An opportunity for al Qaeda? 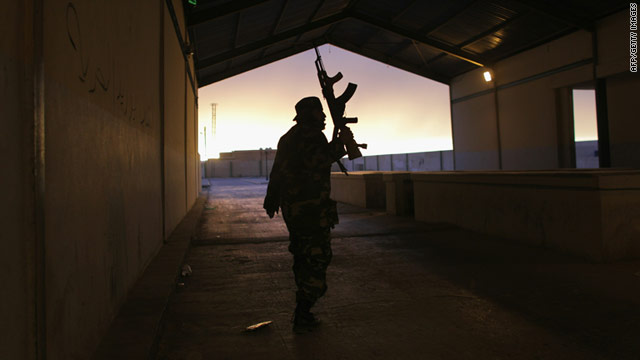 A border guard in an empty customs hall on the Libya-Egyptian border. Fears are easing that al Qaeda will fill the void in Libya.
STORY HIGHLIGHTS

Some may view this as Gadhafi's greatest delusion yet.

Militant Islamists have played almost no role in the uprisings in Libya or anywhere else in the Arab world, and for most Arabs, energized by a powerful democracy movement, al Qaeda now appears more irrelevant than ever.

But there is nevertheless a danger that spiraling violence in Libya may provide militant Islamist groups future opportunities in the country.

Radicalization has run higher in Libya in recent years than many other Arab countries, especially in Libya's impoverished, restive eastern provinces, whose tribes have long felt discriminated by Tripoli. At the peak of the Iraqi insurgency, more Libyans per capita traveled to join al Qaeda in Iraq than any other country. Anger over the Iraq war contributed to the radicalization of a generation of young Libyans.

Some are concerned that the increasingly chaotic scenes in Libya are the beginning of a videotape that has been played before.

In Iraq, chaotic conditions after the fall of Saddam Hussein gave foreign Islamist terrorists led by Abu Musab al-Zarqawi an opportunity to build up operations in the country. The ensuing sectarian civil war, which they helped provoke, radicalized the local population, and provided al Qaeda with greatly expanded recruiting opportunities among Iraq's Sunni community. More than 100,000 Iraqis died before the insurgency was contained, more than 10,000 of whom were killed by al Qaeda suicide bombers.

In Algeria, a 1992 army coup following electoral gains by Islamist parties spawned a violent Islamist insurgency which saw the emergence of the GIA, a hard-line Islamist terrorist group founded by veterans of the Afghan anti-Soviet jihad, which had no qualms about massacring civilians. More than 100,000 Algerians were killed in the crossfire of civil war before the insurgency waned in the mid-1990s.

Noman Benotman, a former Libyan jihadist, is under no illusions about the opportunities available to al Qaeda and like-minded groups if there is an extended period of turmoil in Libya. "If there's chaos, there will be an opportunity for them. That's just alphabetic," Benotman, now a senior analyst at the Quilliam Foundation, a UK counter-extremist think-tank, told CNN.

Benotman returned to London Monday after a two-week visit to Tripoli, and his warning comes at a deeply uncertain time for Libya.

A post-dictator era in the North African state was always going to pose more challenges than in neighboring Egypt and Tunisia because of the country's deeply tribal structures, lack of experience with elections, and only slowly emerging middle class.

Such conditions were created and compounded by Gadhafi's deliberate suppression of civil society, his refusal to develop and empower state institutions, and his strategy of divide and rule between a baffling array of competing power centers, including revolutionary committees across the country that were intentionally created to cement his rule.

All this would have made a post-Gadhafi transition difficult at the best of times.

But the country is now in deep disarray and, unlike in Egypt and Tunisia, the army may be too weak and divided to step into the breach.

Difficulties for jihadists in exploiting the unrest

According to Benotman, even during a period of sustained unrest, al Qaeda and like-minded groups will not find it easy to seize the opportunity and build up their operations in Libya.

Benotman points out that there is no established jihadist group left on the scene in Libya to exploit the unrest by recruiting, organizing and directing potential recruits.

In the mid-1990s the LIFG had conducted a deadly campaign of attacks on Libyan security services, before a crackdown largely constrained the group's ability to operate inside the country.

The breakthrough was the result of a two-year dialogue launched by Saif al-Islam Gadhafi, the son of Libya's leader, and brokered by Benotman, a former high-ranking figure in the group. The agreement also saw the group publish a new code of ethics for jihad, forbidding attacks on civilians and outlawing attacks in the West.

Senior CNN International Correspondent Nic Robertson and I interviewed leading figures of the LIFG in Abu Salim prison in Tripoli in September 2009, shortly before the group's leaders were released. Although they were then behind prison bars, their disavowal of violence appeared genuine, and they appear to have stuck to their side of the bargain since.

Some have argued that with the LIFG sidelined, the best-placed group to take advantage of deteriorating conditions in Libya is al Qaeda in the Islamic Maghreb (AQIM), a largely Algerian terrorist group that grew out of the GIA. In an indication that it seeks to exploit the situation in Libya, AQIM Thursday released a statement in support of the uprising in Libya, stating that it will do whatever it could to help.

AQIM may have some opportunities in the medium term to establish itself in Libya. In an interview with CNN's Robertson in September 2009, Saif al-Islam Gadhafi said a number of Libyans had joined AQIM's ranks in Algeria and Mali and that the group would "love to energize young Libyans."

In the near term, however, AQIM is neither well-placed to join in the uprising nor to exploit it. The group, now largely based in the Sahel region of Mauritania, Mali and Niger, has very little presence in Libya because of the previously tight grip of Libya's security services, and has been largely driven out of neighboring Algeria.

Furthermore, according to Benotman, there has been lingering animosity between the Algerian terrorist group and Libyan jihadists ever since the GIA killed a number of LIFG members in Algeria in the mid-1990s, after the Libyans took issue with the GIA's super-extremist ideology.

According to Benotman, the LIFG's new code of jihadist ethics, widely made available across Libya, will make some young Libyans think twice about joining terrorist groups.

Al Qaeda has had no role in this uprising, none of the demonstrators are calling for an Islamic state.
--Noman Benotman, former Libyan jihadist
RELATED TOPICS

Al Qaeda "Central," Osama bin Laden's organization based in the tribal areas of Pakistan, has little or no presence in Libya, and will likely find it difficult in the foreseeable future to recruit operatives from the country. The fact that one of al Qaeda's key propagandists -- Abu Yahya al Libi -- is Libyan may help in selling al Qaeda's message in the future, but this has been partially offset by the fact that his brother was one of the LIFG leaders who repudiated al Qaeda in 2009.

The reduced relevance of al Qaeda

Another factor that will make it difficult for Islamist terrorist groups to exploit the situation in Libya is the reduced relevance of al Qaeda's message as a pro-democracy movement sweeps across the Middle East.

"Al Qaeda has had no role in this uprising, none of the demonstrators are calling for an Islamic state," Benotman told CNN.

Even senior al Qaeda figures now concede this. The revolutions sweeping the Arab world were not the "perfections for which we hoped," purportedly wrote Attiya Allah, a leading Libyan al Qaeda ideologue believed to be based in Pakistan. Some reports had indicated that Allah died last year.

The statement posted on the internet Wednesday, and translated by the SITE Institute, was authored on February 16 as protests started gathering force in Libya. Expressing rather limited ambition, Allah said he hoped that a post-dictator era would give al Qaeda greater freedom to proselytize in the Middle East.

Al Qaeda currently has no "magic wand" to provide the necessary manpower to overturn governments in the Middle East, added Allah.

Libyan officials have painted a different picture, but their claims have been difficult to verify.

Officials, for example, alleged Sunday that a group called the Islamic Emirate of Barqa carried out deadly attacks on military installations in and around Darnah, a town on the Mediterranean coast in eastern Libya, with a population of around 80,000. CNN has not been able to verify the claim

The town may emerge as something of a litmus test for the reach of al Qaeda's influence in Libya. If militant extremist groups gains traction anywhere in Libya, they will likely do so first in places like Darnah, where years of neglect by the Gadhafi regime have created some of the bleakest socioeconomic prospects for young men in the Middle East, as well as simmering anger toward Tripoli.

By most accounts, radicalization has run high in the town in recent years. According to al Qaeda administrative records seized by the U.S. Army in Sinjar, Iraq, in 2007, 52 men from that town -- more than any other city in the Arab world -- traveled to join al Qaeda's Iraqi affiliate.

Benotman says extremists may now be losing ground in Darnah. He points out that Islamist demands have been absent from television images of the townsmen chanting in celebration of what they believe to be the end of Gadhafi rule.

If prospects improve in places like Darnah, young men will likely be less attracted to groups like al Qaeda, its blame-all-on-America narrative, and its promise of jihadist adventure, glory, and rewards in the afterlife. For young Libyans the sense of excitement of being part of a historic democracy movement sweeping the Middle East may also make the lure of al Qaeda fade. These events are creating a powerful narrative and promise of their own.

In the battle to shape the future of Libya, much will depend on what happens in the next days and weeks. Thus far, eastern Libya -- the most promising recruiting ground for Islamist terrorist groups -- has largely been spared the brutal crackdown taking place in an around Tripoli. If forces loyal to Gadhafi were able to retake control of eastern Libya, all bets would be off. The bloodletting would undoubtedly play into the hands of al Qaeda and like-minded groups.

Benotman says Libya's best hope for avoiding a dangerous slide into chaos may now lie with the Free Officers, the group of young army officers who overthrew Libya's monarchy and brought Gadhafi to power in 1969.

Benotman says many of the Free Officers still have high-ranking positions in the country's military, and increasing numbers of them have defected from the regime, disturbed by Gadhafi's brutal crackdown on civilians. "This is a group drawn from all the tribes and regions of Libya, and they would be seen as representing the whole nation," Benotman told CNN.