France to call for arms embargo against Libya at UN meeting 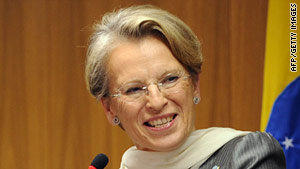 (CNN) -- At a U.N. Security Council meeting Friday to discuss measures against Libya, France said it will ask for a complete arms embargo and sanctions against the North African nation and request that the International Criminal Court look at the violence directed at civilians there as crimes against humanity.

"The situation is dramatic (and) even though we don't know the exact number of victims, a lot of things indicate that there are several hundred so there cannot be any impunity," said French Foreign Minister Michele Alliot-Marie to the France Info public radio station Friday.

On Thursday, the Russian foreign ministry said sanctions against Libya will be ineffective.

"While (sanctions) might work in some situations, you can hardly say that they are an effective method of international action," the foreign ministry said.

From CNN's Paula Newton and Per Nyberg