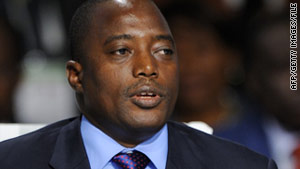 Joseph Kabila was at the palace when the attack occurred, but was not injured.
STORY HIGHLIGHTS

(CNN) -- Armed men on Sunday attempted to attack the residence of Joseph Kabila, president of the Democratic Republic of Congo, but were repelled by troops at a checkpoint before reaching the palace, the country's communications minister said.

Six of the gunmen were killed and an unknown number of others were captured, Lambert Mende told CNN.

Kabila was at the palace at the time of the attack, but was not injured. Mende described the incident in the capital, Kinshasa, as an act of terror and not a coup attempt.