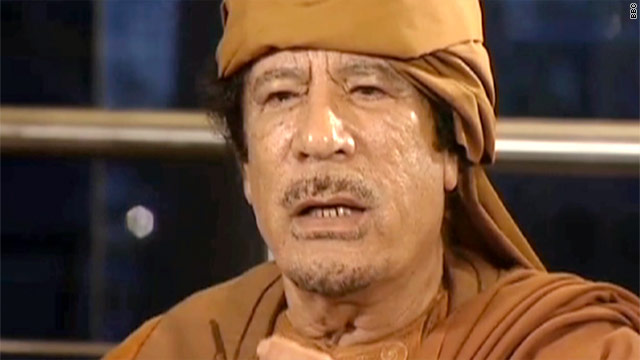 Libyan leader Moammar Gadhafi tells the BBC and ABC News that he blames al Qaeda for holding the city of Benghazi.
STORY HIGHLIGHTS

(CNN) -- Libyan leader Moammar Gadhafi appeared Monday either to not know that demonstrators in cities throughout Libya are calling for an end to his rule or not accept it, according to excerpts from the interview, which a U.S. official described as "delusional."

"No demonstration at all in the streets," he told ABC News and the BBC in a joint interview carried out at a restaurant in Tripoli, excerpts of which were posted on the BBC's website.

Gadhafi, wearing sunglasses and clad in brown tribal clothing, refused to accept the reporter's assertion that they were not. "No. No one against us. Against me for what?"

He repeated his assertion that he is not president, but one of the people. "They love me, all my people with me, they love me all. They will die to protect me, my people. No, no."

Gadhafi: 'My people will die for me'

What are U.S. options for Libya?
RELATED TOPICS

Asked why his people had captured and were holding the nation's second-largest city, Benghazi, Gadhafi said it was al Qaeda, not the Libyan people, who had done so. "Al Qaeda," he said. "They came from outside."

ABC's Christiane Amanpour, in a posting on the network's website, said Gadhafi arrived for the interview in a small convoy of sedans accompanied by little security.

"Gadhafi said he wanted to speak to the press to get the truth out, and he spent more than an hour with us trying to put forth his side of the story," Amanpour wrote.

He questioned how the international community could freeze his assets, impose sanctions and embargo arms sales based on media reports, and invited the United Nations to carry out an independent "fact-finding mission," she reported.

He vowed not to leave Libya, she reported, and denied having used force against his people.

"He seemed to be in complete denial about the protests against him, and that other big cities in Libya, particularly those in the east, had been taken by his opponents," she said. "He simply rejected the notion that any walls were closing in on him. He denied he was besieged in the capital and said he would survive the current situation."

He reiterated an assertion he first made last week that his opponents have been given hallucinogens by al Qaeda operatives, and he said he felt betrayed by the United States, which had lifted its sanctions on the country after Gadhafi agreed to give up his pursuit of weapons of mass destruction in 2003.

"I'm surprised that we have an alliance with the West to fight al Qaeda, and now that we are fighting terrorists they have abandoned us," he said, according to Amanpour. "Perhaps they want to occupy Libya."

Gadhafi called U.S. President Barack Obama a "good man" but said he might have been given "misinformation."

"The statements I have heard from him must have come from someone else," Gadhafi said.

U.S. Ambassador to the United Nations Susan Rice was unimpressed. "It sounds, just frankly, delusional," she told reporters. "And when he can laugh in talking to American and international journalists while he is slaughtering his own people, it only underscores how unfit he is to lead and how disconnected he is from reality.

"It makes all the more important the urgent steps that we have taken over the course of the last week on a national basis, as well as the steps that we've taken collectively through the United Nations and the Security Council, and we're going to continue to keep the pressure on."

She called on Gadhafi "to step aside to prevent further bloodshed and to allow the Libyan people to have a government that is responsive to their aspirations."