Libya's tribes rise up against Gadhafi 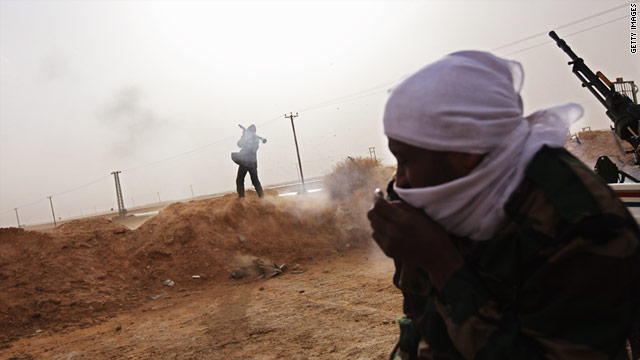 A tribal rebel fires a rocket-propelled grenade from a militia post on February 27 in Ajdabiya, Libya.
STORY HIGHLIGHTS

(CNN) -- Soon after the Libyan rebellion escalated, a senior member of the nation's powerful Warfallah tribe announced it would no longer support Moammar Gadhafi, saying that "he is no longer a brother."

The Zawiya tribe, based in a petroleum-rich region in the east, threatened to cut off oil flow. The Bani Walid tribe decided to withdraw its men from the regime's security brigades. And the influential Zintan tribe, allied in the past to Gadhafi's own tribe, broadcast a statement of support for the opposition.

One after another, Libya's myriad tribes are falling in line against Gadhafi, and the implications are enormous, said longtime observers of Libya, because for centuries, tribes have formed the backbone of the North African nation.

Many Americans pride themselves on God and country. In Libya, it's God, tribe, then country.

Who is the opposition in Libya?

Libya's 140 or so tribes and the clan and family structure that fall under them remain the most important aspect of a society that lags behind many others in the region in development, said Ronald Bruce St. John, a scholar who has visited Libya numerous times and published several books about the country.

With the exception of the Red Crescent Society and the Boy Scouts, few civil society institutions exist anymore in Libya, crushed by four decades of Gadhafi's authoritarian rule. There are no trade unions, PTAs or Lions Clubs.

The tribes have filled those gaps and because of that, they have perhaps taken on a stronger role in Libya than in other Arab nations.

"Libyans have a strong loyalty to tribe," said Philip Carl Salzman, a McGill University professor of anthropology and author of "Culture and Conflict in the Middle East."

"A tribe provides welfare in times of need," he said. "They have a collective responsibility."

If one member of a tribe is attacked, the reaction is to help or exact vengeance, Salzman said. Tribes are especially involved in resolving family disputes.

Gadhafi recognized the power of his nation's tribes when he seized control in 1969. He saw tribal leaders as traditional forces opposed to his radical socialist agenda, St. John said, and, at first, he tried to suppress them.

But later he tried to co-opt them, establishing a People's Social Leadership Committee, which essentially was a collection of tribal leaders.

St. John said it was Gadhafi's way of telling the tribes: You are now responsible for your people. If any member steps out of line, we expect you to discipline him or her.

The committee's creation followed an abortive coup supported by the Warfallah tribe, whose members formed a chunk of the military.

Celebs under fire for Libya concerts

According to a U.S. State Department document, Gadhafi "began to purge the military periodically, eliminating potential rivals and inserting his own loyal followers in their place."

He filled the higher echelons of the military and elite government posts with members of his own Gadhadfa tribe, but pitted them against others.

Gadhafi's actions back then reflected Libya's lack of nongovernmental organizations and the strongman's official recognition of tribes in his own ideological manifesto, "The Green Book," said St. John.

Libya's tribes have never wielded political power, but if Gadhafi falls, it's likely that a provisional government would resemble a patchwork of their leaders, Salzman said.

"I think the tribal elders would have to meet from different tribes and agree on some kind of structure," Salzman said.

The problem, said Salzman, may lie in divisions between East and West that sprouted in Roman times with the carving of Libya into three states: Tripolitania in the west, Cyrenaica in the east and Fezzan in the south.

The states and the tribes that lived in each remained independent until 1931 when Italian colonizers put down a rebellion with brute force and unified Libya again. But the nation was split again when Italy was defeated in World War II -- Tripolitania and Cyrenaica were controlled by the British and Fezza, by the French.

A unified and independent Libya emerged in 1951 but the east-west tribal divisions remained deep, said St. John, because the king, a scholar of religion from the east, showed little interest in running his country.

"King Idris was a poor monarch," St. John said. "He was disinterested in government. He was a religious scholar interested in tribal affairs. The eastern tribes benefited from Idris more so than the western tribes."

Now, with the Libyan crisis sliding closer to war, the embattled leader is sure to see other tribes in the same vein. For now, several tribes in the west and south are reportedly loyal to Gadhafi, among them Gadhafi's own tribe and the Magariha, the tribe of the Lockerbie bomber Abdelbeset Ali Mohmed al Megrahi.

But the powerful Warfallah have already defected as have the Zintan, one of the first towns in western Libya that revolted last month.

In a recent speech delivered on state television, Gadhafi's son Saif a-Islam Gadhafi, blamed Libya's unrest on tribal factions and warned of civil war with members of different tribes "killing each other in the streets".

But when they rose up to fight their Italian colonizers, Libya's tribes stood as one against a common enemy. Gadhafi's foes are hoping for that unity again.

A November 18, 1922, New York Times story began this way: "The latest to enter the Near Eastern struggle are the Bedouins of Tripolitania and Ceryainica, who are reported to have sunk their local differences and united ... to expel the Italians and establish their own government."

The article went went on to raise speculation on how long the tribes, who have fought each other for generations, could stay united to fight someone else.