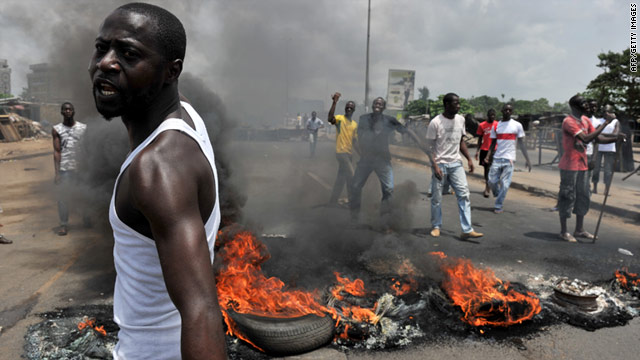 In a statement to the press, the council said the ongoing dispute over who is president of the country risks a resurgence of the civil war that erupted in 2002. The Security Council has endorsed the election of Alassane Ouattara but his opponent, President Laurent Gbagbo, refuses to leave office.

The United Nations says 50 people died in violence this week in the country.

The Security Council said it is deeply concerned about the recent escalation of violence, especially in the nation's largest city, Abidjan. The United Nations, following a briefing by the organization's peacekeeping director, also criticized attacks on civilians, including women.

Ivory Coast's U.N. ambassador, Youssoufou Bamba, a Ouattara loyalist, said the Security Council statement should have been stronger. The envoy warned a genocide is looming against Ouattara supporters and the council should realize people are being killed along ethnic lines.

The council did condemn "threats, obstructions, and acts of wanton violence" by Gbagbo's forces against U.N. personnel.

A U.N. official told CNN in New York that U.N. forces are being harassed and U.N. contract workers kidnapped. The United Nations guards Ouattara in an Abidjan hotel as part of its peacekeeping mission.

The Security Council also condemned restrictions placed on the right of expression in Ivory Coast, such as attempts to disrupt U.N. Radio and use of state radio to incite violence.

The Security Council urged the U.N. mission in Ivory Coast to monitor the arms embargo that is in place. This week, the United Nations' peacekeeping director, Alain le Roy, apologized after the U.N. erroneously said late Sunday night that Belarus illegally shipped three attack helicopters to the Gbagbo forces.

The United Nations and the two sides in Ivory Coast await a report by an African Union panel that visited the country and is preparing possible solutions to the deadlock.