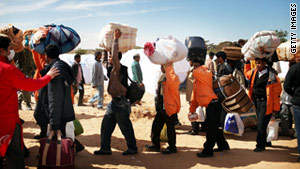 Men who recently crossed into Tunisia from Libya wait to be assigned a tent in a United Nations displacement camp.
STORY HIGHLIGHTS

Two Marine planes left the airport in the Tunisian island of Djerba with a total of 132 Egyptians on board, the U.S. State Department said.

Two additional Air Force C-130s are en route to Djerba and will take another group of Egyptians home. All four U.S. planes are expected to arrive in Cairo by Saturday night, U.S. officials said.

There are at least 10 other evacuation flights scheduled for Saturday -- six British, three Spanish and one Italian -- said Firas Kayal, a spokesman for the United Nations refugee agency.

Nine of the flights are to evacuate Egyptians and the other is for Malians. There are a few thousand Egyptians left in Tunisia awaiting evacuation after more than 40,000 were taken home.

The violence in Libya has generated an exodus out of the North African nation. Almost 200,000 people, a majority of them foreign workers, have fled Libya -- nearly 100,000 to Tunisia and a similar number to Egypt -- according to the office of the United Nations High Commissioner for Refugees.

The numbers of people entering Tunisia daily from Libya dropped to 1,800 Thursday and Friday and stood at 3,000 Saturday. Previously, they averaged 10,000 to 15,000 people.

Hovig Etyemezian, a field officer for the U.N. refugee agency, attributed the drop in part to fear and the manipulation of the flow of refugees by Libyan authorities.

"A lot of them were scared from leaving because of the fighting so they were staying in their houses," he said Saturday. "We fear the regime might be blocking refugees from the border."

A Sudanese man who crossed into Tunisia said Libyans had been confiscating phones and SIM cards of people fleeing. He said people are afraid to make the journey because of the fighting and the cost for bus or taxi transport to the border has spiked.

However, he said, Libyans are not stopping traffic toward border.

Raoul Gernali, a Filipino engineer who had been working on a Libyan water project, said Libyan soldiers at the Tunisian border stole his laptop, money and mobile phone.

Because of complications with his group's flight home, he and his Filipino colleagues have had to spend three days at the airport.

Many countries, such as India and China, put in place well-organized evacuation operations for their citizens. But others, including Egyptians and Bangladeshis, have been left to fend for themselves.

The U.S. State Department said Saturday it would donate $3 million to the International Organization for Migration (IOM) as part of a joint U.S.-IOM partnership to help get home thousands of Egyptians and other nationals from Africa, South Asia and Southeast Asia.

Kayal said more than 10,000 Bangladeshis are awaiting transport in Tunisia.

Many Bangladeshis have had to walk to the border because their money was stolen by soldiers and they could not pay for transportation costs. One man suffered a heart attack and died, aid officials confirmed.