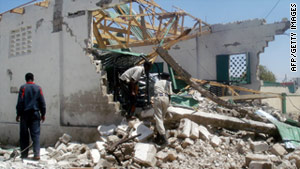 Dozens of African Union soldiers have died in clashes in Somalia.
STORY HIGHLIGHTS

(CNN) -- Dozens of African Union soldiers have been killed in two weeks of fierce fighting in Somali capital of Mogadishu, clashes that resulted in significant gains against local and foreign extremists, according to an African Union official familiar with the scale of those losses.

The fighting was part of a major offensive by Ugandan and Burundian forces, who are part of the African Union Mission in Somalia (AMISOM), against Al-Shabaab, an al Qaeda-linked extremist group trying to take over the weak transitional federal government and implement a stricter form of Islamic law, or sharia.

AMISOM officials said they would not specify exactly how many soldiers have been killed or wounded in the operations until the families and contributing countries were properly notified. Also, they didn't detail Al-Shabaab losses.

"This loss of life comes in an intently meaningful and honorable victory, one which will ensure that many more lives will be saved in the long run," Wafula Wamunyinyi, a senior AMISOM official, told reporters in Nairobi, Kenya.

"The positions that we have seized in the past week break the grip of extremist militants in the city. We have taken a very important step towards the stabilization of Mogadishu and in pursuit of a day many deemed impossible -- the day when law and order returns to Mogadishu," Wamunyini said.

The operations began on February 19 with the clearance of a network of urban trenches by Ugandan forces. That battle uncovered further proof that foreign fighters are playing a key role in the leadership of Al-Shabaab, originally a homegrown Somali movement.

According to AMISOM, several key foreign fighters were killed in the operation. "Al-Shabaab is organized like an Al Qaeda operation," said force commander Maj. Gen. Nathan Mugisha, "their tactics are replicated from Afghanistan."

On February 23, Burundian forces successfully took two key Al-Shabaab positions in fierce fighting -- the former Ministry of Defense buildings (known as Gashindiga) and the former milk factory, according to Mugisha.

Located in northeastern Africa, Somalia has not had a stable government since 1991, and fighting between the rebels and government troops has escalated the humanitarian crisis in the famine-ravaged country.

One U.N. humanitarian official said on Friday voiced urgent concern about the "increased displacement" caused by the fighting and the effects of drought there, said Valerie Amos, under-secretary-general for humanitarian affairs . She visited Somalia last month and talked to reporters on Friday.

"I again urge all parties to the conflict and AMISOM (the African Union peacekeeping mission in Somalia) to comply with international humanitarian law in order to minimize harm to the civilians," Amos said.