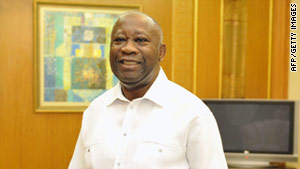 President Laurent Gbagbo's ability to control the coffee and cocoa industries could be key to his staying in power.
STORY HIGHLIGHTS
RELATED TOPICS

(CNN) -- Ivory Coast President Laurent Gbagbo, who is fighting to keep a political title the United Nations says isn't his, on Monday nationalized the nation's two main cash crops, coffee and cocoa, according to state-run television.

In a statement read on air, the government announced that "the purchase of coffee and cocoa from producers and producer groups is done exclusively by the State on the entire national territory."

The Ivory Coast is the world's largest supplier of cocoa beans.

Gbagbo, the incumbent, has refused to give up power since an electoral commission declared challenger Alassane Ouattara the winner of the November presidential election. Gbagbo's refusal to step down has sparked violent clashes between supporters of the two rivals, resulting in the deaths of 365 people since December.

Ouattara's "New Forces" loyalists claimed on the group's website to have taken the west Ivory Coast city of Toulepleu after intense fighting with Gbagbo forces on Sunday.

Gbagbo's ability to maintain control over the nation's coffee and cocoa industry could be key to his staying in power. Coffee and cocoa experts have provided the embattled leader with a lucrative revenue source to pay loyal civil servants and military officers.

In January, Ouattara called for a ban on cocoa and coffee exports in an effort to shut down that revenue stream and force Gbagbo out of office.