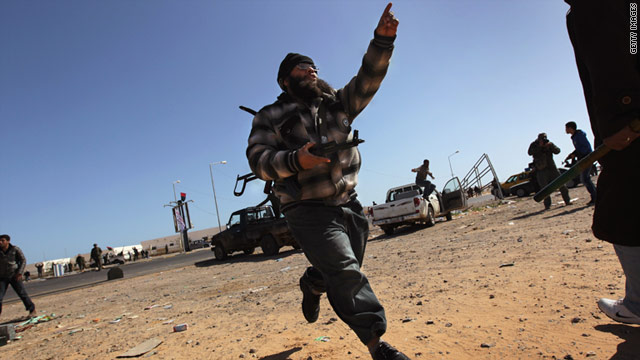 A rebel runs for cover during a government airstrike in the area of Ras Lanuf, Libya, on Monday.
STORY HIGHLIGHTS

Ras Lanuf, Libya (CNN) -- "Down! Down!" the man at my hotel room door said. It was 4:30 a.m. Monday in Ras Lanuf, and I had hoped to get a decent night's sleep for the first time in weeks. Yet again, my hopes were dashed.

Through the haze of sleep deprivation and exhaustion, I could say nothing. I understood nothing.

The staff of the Fadeel Hotel was going from room to room, telling guests -- journalists only -- that they had to leave, at once.

I quickly dressed, packed my bag, and went downstairs.

It was still pitch black outside, and the lobby was teeming with still photographers, cameramen, translators, fixers, producers and print and TV reporters, all trying to understand why the urgent need to leave.

The young and inexperienced go to war

Opposition at work in Benghazi

There were plenty of rumors, and no facts.

"Poison gas! Poison gas! Gadhafi is using poison gas!" one of the fighters told me.

"The army is coming here, they'll be here soon," said another.

"You must go now," the hotel manager told me. "It's not safe in Ras Lanuf."

The television in the lobby was tuned to the Arabic satellite news channel Al-Arabiya, which was flashing that Libyan government forces had taken up defensive positions around Ras Lanuf, which had been taken over by anti-Qaddafi rebels two days before.

The rebels had advanced beyond Ras Lanuf, by about 30 kilometers, to the town of Bin Jawad, but were pushed out within hours. Their advance westward, begun in the refinery town of Al-Brega, had come to a screeching halt.

And now it was beginning to look as if the tide was turning.

As we waited in the lobby, I had visions of the Libyan army pulling up outside the hotel, rounding us all up and taking us back to Tripoli, hands bound and blindfolded, to be put on trial. Libyan state television had announced that all journalists who had entered the country from Egypt without visas would be considered outlaws and, worse, collaborators with al Qaeda. As the first Western television journalist to enter Libya from Egypt during the current crisis, I had reliable information I was high on Tripoli's wanted list.

I watched as the Ras Lanuf press corps bundled into cars, or onto the back of pickup trucks, and drove away in the dark. We decided to wait until first light before moving.

In the meantime, the hotel staff was removing the big flat-screen TV in the lobby, and desktop computers and printers from behind the reception desk and back offices.

After the other journalists had left, the cleaning staff -- migrant workers from Bangladesh -- cleared away dozens of paper coffee cups, mopped the floor and emptied ashtrays overflowing with the butts of dozens of jumpy journalists.

When it became light, instead of going east -- away from the supposedly advancing Libyan army -- we and a crew from the BBC went west, toward Bin Jawad, to see if there was any truth to the claims Gadhafi's men were on the move.

The next move for the U.S. in Libya

Libya witness: Rockets on the ground

We drove slowly, stopping regularly to survey the terrain, to ask any fighters along the way about what they had seen and what they knew about the front lines.

The few we met assured us the government forces were still on the outskirts of Bin Jawad and weren't moving forward. It was disconcerting, however, that as we continued to drive, there was almost no one to speak with. The usual gatherings of boisterous, friendly rebel fighters gathered around cars, pickup trucks and Chinese- and Soviet-made anti-aircraft guns were nowhere to be seen. The road was almost empty.

We stopped one last time about five kilometers east of Bin Jawad. Three kilometers away we could see something blocking the road. The BBC crew, who had a bigger and better camera, went a bit further to get a better look, but after about five minutes came racing back, lights flashing.

Meanwhile, we heard a jet overhead. We'd had two close misses with bombs a few days before, so we jumped to the side of the road, ready to lie flat in the sand in case they bombed again.

In the distance we heard the loud, hollow pop of anti-aircraft fire. The plane flew in a wide arch twice above us, but dropped no bombs. When it flew on, we regrouped with the BBC crew, who recounted that while videotaping down the road, a shot had been fired over their heads. The cameraman said he saw in his viewfinder vehicles pointing east toward Ras Lanuf, and men who were all wearing identical uniforms. That didn't sound like the motley opposition forces. And if they had been opposition forces, they would have opened fire with everything they had on the jet above. But they didn't.

In other words, those dots down the road were probably soldiers from the Libyan Army.

Driving back toward Ras Lanuf, we saw a huge plume of black smoke and brown dust a few kilometers up ahead. Libyan Air Force jets were attempting to bomb rebel targets again. It was just one of many such air strikes in the area Monday.

Along the main Benghazi-Tripoli road that skirts Ras Lanuf, we found groups of opposition fighters chanting and joking about Gadhafi "the dog," Gadhafi "the donkey," but it was beginning to all ring hollow. There seemed to be less of them about, and fewer and fewer appeared to be moving to the front.

We returned to the hotel in mid-afternoon. It was open again, but the staff had fled. The new "staff" was comprised of men and teenagers with machine guns and rocket-propelled grenades. They were going from room to room, turning on the TVs, using the bathrooms, calling to their friends from the balconies. In the parking lot outside, they regularly fired rounds from their automatic weapons. Although I didn't see it, a print reporter friend told me they had spent much of the afternoon smoking hashish. To borrow a line from one of my old scripts, "morale is high, and so are the troops."

In the coffee shop, more fighters were crowded behind the bar, helping themselves to whatever was available, handing out bowls of cornflakes with milk and chocolate syrup. Everything was free.

Pickup trucks had pulled up in front of the hotel, and they were loading them with food and crockery from the kitchen. Theoretically, I suppose, they were commandeering supplies for opposition forces in the area.

All the while, they were eager to reassure the few journalists who had returned in the hopes of spending another night in the Fadeel Hotel that all was well, that they would be safe, that they would sleep soundly.

The more insistent their reassurances, however, the more tenuous the prospect of a night at the hotel became. The thought of stoned adolescents armed to the teeth stumbling around the halls at night, in addition to the very real possibility of a nighttime assault by the Libyan army on Ras Lanuf, was more than even the most battle-hardened war correspondents cared to ponder.

The CNN crew was among the last guests to leave the hotel just after sunset. There was no need to settle the bill or return the keys.